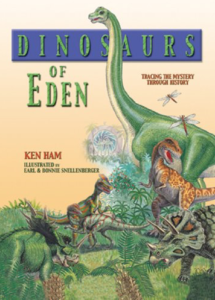 Description of author:  Ken Ham is founder and director of Answers in Genesis (www.AnswersInGenesis.org)

Comments:  This book, geared toward children, emphatically highlights the differences between the Biblical worldview and the current secular worldview.  Ham integrates the history of dinosaurs into Biblical revelation.  Overviewing the first chapters of Genesis, he explains recent creationism (p. 10-13); the Garden of Eden, the Fall of man into sin, and Cain’s murder of Abel (p. 22-26); the Noahic flood (p. 28-33); and the world after the flood (p. 40-47).  He closes the book with an explanation of the future judgment of the world and of sinnners and the plan of salvation (p. 60-64).  Throughout the book Ham emphasizes, as much through illustrations as through words, the truth that dinosaurs lived side-by-side with humans.  The book is full of illustrations of particular species of dinosaurs with their names (including helpful pronunciation guides).  Much of what Ken teaches is (not surprisingly) directly opposite of current ‘scientific’ theory, including the relatively recent extinction of dinosaurs, dinosaurs and men living at the same time, and recent creationism.  He also argues persuasively for the equating of dinosaurs with the Biblical word ‘dragon’ (p. 14; see, for example, Isaiah 34:13, Jeremiah 14:6, Malachi 1:3).  On the whole, I recommend this book. Yet Ham includes several fanciful elements that I believe militate against his purpose:  for example, his illustrations of dinosaurs being harnassed by humans, like horses or oxen (p. 42);  his attempt to illustrate Hell (p. 57); and the overall setting of two kids entering a time machine.  This seems to me to be somewhat analogous to communicating serious Bible stories through cartoons – the medium contradicts the message.