A Biblical Critique of Infant Baptism 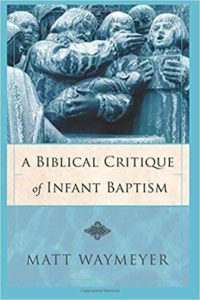 Description of author:   Matt Waymeyer is a graduate of The Master’s Seminary and is the pastor of Community Bible Church in Vista, California.

Comments:  This is a very logical, thorough, and fair critique of the doctrine of infant baptism.  There are several factors that seem to contribute to the excellence of this work.  First, Matt quotes extensively from paedobaptists (those who baptize infants) in such a way that demonstrates he has a firm grasp of the arguments that are used in favor of the doctrine.  His critique is not superficial to say the least.  Second, Matt does a masterful job of exegeting and explaining the relevant texts used to defend infant baptism.  At the end of the day, the question is, What does the Bible teach?  It would be very difficult to go away from this critique holding onto the notion that the Bible teaches infant baptism.  Finally, Matt’s personal involvement in the question, as described in the introduction, makes his conclusions all the more convincing.  He began his study of the subject with a predisposition toward receiving the doctrine.  In the six chapters he explains the six reasons he rejects infant baptism: (1) The absence of a direct command; (2) The absence of a Biblical example; (3) The absence of compelling evidence; (4) The breakdown of the circumcision argument; (5) The discontinuity of redemptive history; and (6) The significance of Biblical baptism.  In the appendix he considers the newness of the New Covenant.  The book includes a list of works cited and a Scripture index.