A Scientific Investigation of the Old Testament 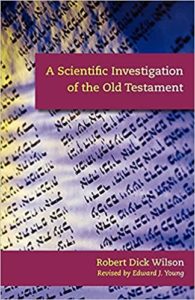 Description of author:   R.D. Wilson (1856-1930) was Professor of Semitic Philology at Princeton Theological Seminary.  Having learned 45 languages, he was a defender of the integrity of the Old Testament in the face of the prevailing Higher Criticism.

Comments:  There is a great deal of ignorance today regarding the reliability of the Bible.  It is not unusual to come across people, especially young people, who believe the Bible has been proven, by archaeology, to be full of errors and generally unreliable as history.  Many believe the text has been so corrupted over the centuries that we really don’t even know what was originally written.  Wilson’s intelligent, though rather technical, work is a classic, and still relevant (though written in 1926), defense of the integrity of the Old Testament.  His purpose is stated in the first paragraph of the Preface:  It is the purpose of the present volume to show that intelligent Christians have a reasonable ground for concluding that the text of the Old Testament which we have is substantially correct, and that, in its true and obvious meaning, it has a right to be considered a part of the ‘infallible rule of faith and practice’ that we have in the Holy Scriptures (p. 5).  The book is divided into seven chapters.  The first chapter is an explanation of his method of investigation.  He then considers the evidence in the middle five chapters:  Text; Grammar; Vocabulary; History; and Religion.  The final chapter is the conclusion, followed by a glossary and list of abbreviations.

Though technical, his arguments are simple and brilliant at the same time.  For example, in regard to the text, he explains how the Hebrew Bible has correctly transmitted the names of the various kings throughout Old Testament history:  Thus we find that in 143 cases of transliteration from Egyptian, Assyrian, Babylonian, and Moabite into Hebrew and in 40 cases of the opposite, or 184 in all, the evidence shows that for 2300 to 3900 years the text of the proper names in the Hebrew Bible has been transmitted with the most minute accuracy.  That the original scribes should have written them with such close conformity to correct philological principles is a wonderful proof of their thorough care and scholarship; further that the Hebrew text should have been transmitted by copyists through so many centuries is a phenomenon unequalled in the history of literature (p. 81-82).  Again, regarding the records of the kings, he writes:  The names of these kings – about forty in all – are the names of men who lived from about 2000 to 400 B.C. and yet they each and all appear in proper chronological order both with reference to the kings of the same country and with respect to the kings of other countries contemporary with them.  No stronger evidence for the substantial accuracy of the Old Testament records could possibly be imagined than this collection of names of kings (p. 86).  One of the most helpful discussions for me personally is his explanation of the large numbers in the accounts of the battles of the Old Testament (p. 191-193).  Though it would be helpful to have an understanding of Hebrew and of the basic arguments of Higher Criticism, anyone who has a serious interest in the Old Testament will greatly profit from this excellent work.