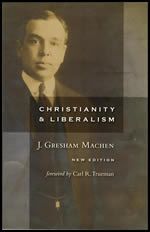 Description of author:  John Gresham Machen (1881-1937) taught New Testament at Princeton Seminary (1906-1929).  He was also the principal founder of Westminster Theological Seminary (1929) and the Orthodox Presbyterian Church (1936).  He was one of the most prominent figures in the Fundamentalist-Liberal debate of the early 20th Century.

Comments:  This is considered by many to be a modern-day classic work.  Machen was a defender of the fundamental doctrines of the Christian faith in a time when his denomination (Presbyterian) completely capitulated to theological Liberalism.  Liberalism was (and is) a direct descendent of Naturalism.   It denies all that is supernatural including the doctrines of the Bible such as the inspiration of Scripture, the deity of Christ, the substitutionary atonement of Christ, the virgin birth of Christ, and the historicity of the miracles recorded in the Bible.  Yet it claims to be Christian.  Machen lays out the truth that Liberalism is not Christianity, and that in fact they are not only two different religions, but they are completely antithetical religions.  Machen explains how these two religions are opposed to one another on every major theological point:  doctrine, God and man, the Bible, Christ, Salvation, and the Church.  He sums up the situation with the observation:  Christianity is being attacked from within by a movement which is anti-Christian to the core (p. 173).  He calls the church to respond in four ways: (1) encourage those who are involved in the front lines of the spiritual and intellectual struggle; (2) officers in the church should be extra diligent in examining candidates for the ministry; (3) officers in the church should show their loyalty to Christ; (4) most importantly their must be a renewal of Christian education (p. 173-177).  Although written nearly a century ago, this book is still as relevent as the day it was written.  Not only is Liberalism still with us, but there is a current movement that is sweeping the church that is quite similar in its tactics and its results to Liberalism,  the emergent church.  Although the Lord will build His church and the gates of Hell will not prevail against it, we are also called to be vigilant and discerning.  Machen certainly has helped us in that task.