The Doctrines of Grace 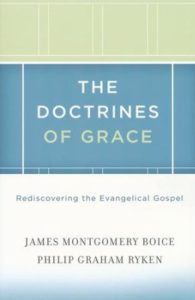 Description of author:  James Montgomery Boice (1938-2000) was the pastor of Tenth Presbyterian Church in Philadelphia (1968-2000).  He was in the midst of writing this book when he was diagnosed with cancer.  He died soon after, asking his associate pastor, Philip Ryken, to complete the book.  Philip Ryken has now replaced Boice as the pastor of Tenth Presbyterian Church.

Comments:  This is a very readable introduction to the doctrines of Calvinism.  The book is divided into three parts:  Part One: The Doctrines of Grace – in these two chapters the necessity of Calvinism is set forth, its importance in regard to the Gospel itself, and its importance as revealed historically in the church.  Part Two:  The Five Points – these five chapters make up the heart of the book.  In them Boice (the middle five chapters were completed by him before his death) explains and defends each of the five points of Calvinism:  (1) Radical Depravity; (2) Unconditional Election; (3) Particular Redemption; (4) Efficacious Grace; and (5) Persevering Grace.  Fortunately Boice does not merely follow the famous acronym TULIP in naming the five points since those names are somewhat misleading, especially T (total depravity), L (limited atonement), and I (irresistable grace).  Part Three:  Rediscovering God’s Grace – the final two chapters explain what true Calvinism looks like in its effects.  It is not merely a theological position, but it is a summation of the biblical truth regarding salvation that results, when properly understood, in gratefulness, humility, holiness, worship and work.