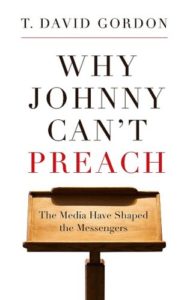 Description of author:   T. David Gordon is professor of religion and Greek at Grove City College.

Comments:  On the whole, this book has a lot of important things to say.  In a nutshell, Gordon lays much of the blame for today’s poor preaching on the fact that today’s preachers have been molded by the culture in general, and the media in particular.  The subtitle of this book is ‘The Media Have Shaped the Messengers.’  His standard for good preaching is the ‘seven cardinal requisites of preaching’ laid out by R.L. Dabney in his ‘Lectures on Sacred Rhetoric’ (1870): (1) textual fidelity; (2) unity; (3) evangelical tone; (4) instructiveness; (5) movement; (6) point; (7) order. According to Gordon, most, or at least many, preachers do not measure up when compared with these objective rules.  He contends that fundamentally the problem is that Johnny can’t preach because Johnny doesn’t know how to (1) read texts (especially verse) and (2) write.  The reason for this is  largely because the technological advances in our culture have drastically reduced our ability to think and write coherently, meaningfully, and logically.  The telephone, television, e-mail, Twitter, have all contributed to our inability to, on the one hand, interpret classic literature (like the Bible) and on the other, to communicate effectively over the pulpit.  I certainly agree with Gordon’s thesis in this regard.

Having read some of the media ecology (as it is called) literature like Neil Postman’s ‘Amusing Ourselves to Death’, and being a promoter of classical Christian education (less the ultra-Reformed leanings of people like Doug Wilson), I greatly resonated with much that is in this book.  Yet I would give the following guarded criticisms: (1) I did not like the overall tone of the book.  Admittedly he warns the reader of this in the preface, but he comes across as one who has an axe to grind.  The book also has a certain tone of intellectual snobbery.  One is almost left with the impression that one should not preach unless one has a classical education.  (2)  It seems to me that his scope is far too narrow.  Realizing that this is not meant to be a treatise on preaching nor an exhaustive account of why preaching is poor today, I would still contend that he is far too fixated on the inabilities to read poetry and to write as the fundamental problems.  Just in education alone, we could easily include the deficiencies in reading generally, memorization, logic, and history.  (3)  His solutions are almost anti-climatic.  After speaking so profoundly regarding Johnny’s trivial preaching, we would expect truly profound recommendations for Johnny’s improvement.  Johnny is given three main suggestions:  (i) seek an annual review from your elders; (ii) learn how to read poetry; and (iii) write letters.  While I would agree that all three would be helpful and certainly make a good preacher better, these things would never make a bad preacher into a good preacher.

In the end, while I agree with much in this book, I think the greatest problems in preaching today go much deeper than the ones enumerated by Gordon.  Far greater issues, in my very limited view, include: (1) prayerlessness; (2) worldliness of the ministers; (3) a very limited and shallow knowledge of the Bible (in English); (4) a lack of deep convictions regarding Biblical teaching; and (5) a lack of experimental knowledge of religion.