7 Men Who Rule the World from the Grave 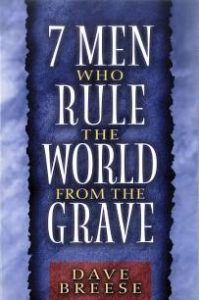 Description of author:   Dave Breese (1926-2002) was an evangelical author and lecturer.

Comments:  To fully comprehend exactly the nature and destiny of our culture, one must understand the ideas that have shaped the thinking of the people who lead it.  Few people in our world understand the power of ideas.  Every idea, if received and acted upon, has consequences.  When a whole culture receives and acts upon an idea it has monumental, almost incalculable consequences.  Those consequences are good to the degree that the idea adheres to or is consistent with truth.  Those consequences are evil to the degree that the idea departs from truth.  Our world faces overwhelming, monumental, almost inconceivably complex dilemnas that threaten the very existence of humanity.  Those dilemnas are the direct result of utterly false ideas that have been received, disseminated, and acted upon by the intellectual leaders of our culture.  Those fundamental ideas have been received so freely by the populace because they pander to man’s natural inclinations, desires, and sinful nature.  These ideas are like drugs that produce a short-term euphoria, but create long-term disaster.  Behind these ideas have been individual men – seminal thinkers who have changed the world by their writings and speeches.  Dave Breese has given us a brief, but insightful overview of 7 of arguably the most important of these men:  Darwin, Marx, Wellhausen, Freud, Dewey, Keynes, and Kierkegaard.  He also includes a chapter on Einstein, but does not include him in the list because the consequences of his theory of relativity were ‘unintended’ (one cannot help but observe, as well, that ‘8 Men Who Rule the World from the Grave’ would have sounded less definitive).  At any rate, I highly recommend this book.  You do not have to have a PhD in philosophy to understand it.  It is very readable and concise, and its content is very important.