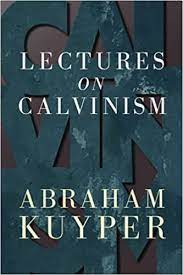 Description of author:   Abraham Kuyper (1837-1920) was a brilliant and almost unbelievably productive Dutch theologian.  Over the years, he was a pastor, editor of two newspapers, voluminous writer, professor, traveling lecturer, founder of the Free University, leader of a political party, member of parliament, and prime minister of Holland.  He is also considered the father of Neo-Calvinism, of which these lectures are a sort of manifesto.

Comments:  These six lectures were given at Princeton Theological Seminary in 1898 as the Stone Lectures, a series of annual public addresses by a visiting scholar.  It is helpful to keep several facts in mind when reading these lectures:  (1) These lectures were given before the World Wars; and (2) Princeton, at the time, was the center of evangelical, Calvinistic scholarship – Benjamin Warfield was the resident professor of theology.

Based on the title of this volume, one might expect an elucidation of the doctrines of grace (the TULIP of Calvinism) or perhaps a look at the history of the development of Calvinism (Synod of Dort, Westminster Assembly, etc.).  But this is not at all his purpose and these truths of doctrine and history are assumed in the lectures.  His purpose is clearly stated at the outset of the sixth lecture:  The chief purpose of my lecturing in this country was to eradicate the wrong idea that Calvinism represented an exclusively dogmatic and ecclesiastical movement.  Calvinism did not stop at a church order, but expanded in a life system, and did not exhaust its energy in a dogmatic construction, but created a life and worldview, and such a one as was, and still is, able to fit itself to the needs of every stage of human development, in every department of life (p. 155).  If you ask why he is concerned with presenting Calvinism as a worldview, he answers that question in detail in the first lecture.  He is concerned about the encroaching worldview of Modernism:  There is no doubt then that Christianity is imperiled by great and serious dangers.  Two life systems are wrestling with one another, in mortal combat . . . From Calvinism have I drawn the inspiration firmly and resolutely to take my stand in the thick of this great conflict of principles.  And therefore, when I was invited most honorably by your faculty to give the Stone Lectures here this year, I could not hesitate a moment as to my choice of subject.  Calvinism, as the only decisive, lawful, and consistent defense for Protestant nations against encroaching and overwhelming Modernism – this of itself was bound to be my theme (p. 3-4).  Modernism, according to Kuyper, is that life view that traces its roots back to the French Revolution and Darwinism – in short, naturalism.  He understands the Roman Catholic Church as an ally in this conflict (see pp. 10, 167).

The six lectures that make up the book are a development of this idea of Calvinism as a life system (or worldview) that will compete with the Mordernist worldview.  Here is a brief summary of the lectures:  (1) Calivinism as a Life System – He introduces his subject and explains what a life system is and why Calvinism qualifies as such; (2) Calvinism and Religion – He explains the Calvinistic approach to God and salvation, and its view of the church; (3) Calvinism and Politics – He demonstrates the effect of Calvinism on political conceptions, including the relationship between church and state and between the individual and the state; (4) Calvinism and Science – He seeks to show that Calvinism promotes true science; (5) Calvinism and Art – He explains how it is that Calvinism advances art even though, historically speaking, it has no specific art form associated with it (as opposed to other life systems like Roman Catholicism, Islam, ancient Greek culture, etc. where particular art forms are directly connected to the life system); (6) Calvinism and the Future – He calls Calvinists to study and promote Calvinism as a life system (see p. 175 where he lists four things he is calling Calvinists to do).

I have no intention of critiquing these lectures in detail, but I would make a few observations.  First, I would point out that, as the reviewer, I am a Calvinist in a limited sense.  I am not a Calvinist in the sense that Kuyper is speaking of.  I affirm the sovereignty of God in salvation and the five points of TULIP, but I do not affirm the traditional Reformed view of the church or eschatology.  And this is why I have serious issues with these lectures.  Although intellectualy very stimulating, these lectures turn Christianity into a philosophy, into a means of moving human culture to the next level.  He writes:  Calvinism . . . meets every required condition for the advancement of human development to a higher stage (p. 28).  These kinds of words frighten me because they suggest dominion theology – the idea that the role of the church is to bring the kingdom rule of God to earth.  This idea is always dangerous  and inevitably leads to the loss of human rights and freedom of the conscience (e.g. Roman Catholic Church in the Middle Ages).  In another place he writes:  Of course this danger [being outdone by a pagan culture] would be far less menacing in case Christendom, in both the Old and New World, stood united around the cross, shouting songs of praise to their King, and ready as in the days of the Crusades to advance to the final conflict (p. 181).  Now as soon as we Christians see Christianity as a philosophy (or worldview) and define our mission as a call to reform the world or advance human civilization, we have truly lost the battle we are in.  Our doctrine is not founded on the formulation of a man or a system of thought produced by theologians over the centuries, rather it is founded on the written Word of God.  And our mission is not to advance humanity to the next level, rather it is to call individuals to be born again, to forsake this world system, and to put their hope in eternal things (Philippians 3:20).  We are called to build up the church of Jesus Christ through the preaching of the Word of God (Colossians 1:27-29), not to refine fallen human culture.

I observed, as reading this book, that Kuyper uses the word Calvinism where I would use the word Scripture or Christ.  For example, he writes:  In Calvinism my heart has found rest.  From Calvinism have I drawn the inspiration firmly and resolutely to take my stand . . . (p. 3-4).  As for me, my heart has not found rest in Calvinism, it has found rest in Christ and in the words of Scripture.  I have an appreciation for Calvinism, and to the degree that it reflects true Scripture doctrine I agree with Calvinism, but, as a philosophy, it is imperfect and not inspired, and certainly not my source of hope.

I will address one more issue in the book. Kuyper claims that Calvinism is the ultimate source of our constitutional liberties (p. 66) and the separation of church and state (p. 87).  In view of the many historical manifestations of ‘pure’ Calvinism (Geneva, Scotland, Puritan New England, etc.) I am somewhat amazed at these claims.  The anabaptists and baptists taught a free church, a pure church, an independent church, and liberty of conscience, centuries before the Calvinists, not because the anabaptists had a perfect worldview or even perfect doctrine (they didn’t), but because they did have a Biblical conception of the doctrine of the church.  It seems to me that the modern day Calvinists have come to honor these concepts in spite of their system, not because of it.  When I speak this way, I am not referring to their view of salvation or the sovereignty of God, rather I am referring to their view of the church, the kingdom and future events.  For in the mind of Kuyper the whole system of thought is the worldview known as Calvinism.