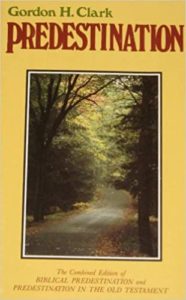 Description of author:   Gordon Clark (1902-1985) was an ordained minister of the Presbyterian Church and served as the chairman of the Philosophy Department at Butler University for 28 years.

Comments:  The title of this book is a word that has always been a source of great controversy in the church.  Predestination is a word used in the New Testament to describe the sovereignty of God in the salvation of His people (e.g. Ephesians 1:5).  It is a word that is virtually synonymous with election and foreknowledge.  I suppose there is no greater affront to human pride than the concept of God’s sovereignty, especially in matters of eternal destiny.  However, few people have seriously contemplated the implications of the many clear statements in the Old and New Testaments regarding God’s sovereign power over everything including man’s intellect, decisions, and salvation.  Few people understand how the doctrines of creation, omniscience, omnipotence, and sovereignty are intimately connected.  When we limit God’s sovereignty we truly take Him off His throne, so to speak.  Biblically speaking, God is immeasurably, infinitely, and irrevocably sovereign, which is another way of saying, God rules.  Gordon Clark, in this book, makes a strong Biblical defense for the sovereignty of God, especially in salvation.  The seven chapter titles are as follows:  (1) Creation; (2) Omniscience; (3) The Eternal Decree and Its Execution; (4) Pre-Destination; (5) Regeneration; (6) Free Will; (7) Epilogue.  He also has a 35 page appendix which is a survey of the Old Testament doctrine of predestination.  A Scripture index and a subject index are also included.  Although I fundamentally agree with Clark and I found this book to be very helpful and clarifying, yet there are several places where I did not fully agree with his understanding of texts.  For example his explanation of Matthew 23:37, which was largely borrowed from John Gill, did not seem very satisfactory to me (p. 96ff) as well as his explanation of Ezekiel 18 (p. 142-143).  At one place he makes a very confusing statement about salvation:  Let us be quite clear on the fact that the Bible does not teach salvation by faith alone (p. 85).  In the context, the statement is not quite as bad as it sounds standing alone, but it is confusing enough to call for a lengthy footnote by the editor for the sake of clarification.  Clark’s style of writing is down to earth and easy to follow, though he comes across in a rather condescending way towards those who are Arminian in doctrine.  On the whole, I recommend this book.  I especially recommend the subject.  Predestination is an important aspect of Biblical doctrine.