The Greatness of Oliver Cromwell 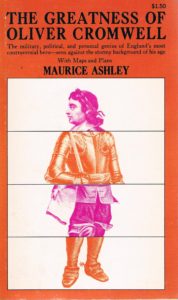 Comments:  Oliver Cromwell (1599-1658) was the central figure in the English Civil War (1642-1651).  As a Member of Parliament and a military genius, Cromwell became a leader of the Parliamentarians against the Royalists.  In the midst of this conflict (1649), the king, Charles I, was beheaded.  Eventually, in 1653, Cromwell was given the title Lord Protector, as the head of state.  Oliver Cromwell was a Puritan and an Independent who was a true champion of liberty of conscience in things religious.  He has always been a controversial figure, despised by many, and often unjustly maligned in history.  Ashley gives us a very positive view of Cromwell as is evident by the title.  He was not a perfect man, but he was a great leader and a very interesting individual.  Although this is a secular history book, I have included it here, because this time period is a very important era in the history of the Puritans in England.  It was during this Civil War that the Westminster Assembly produced the Westminster Confession.  Although Ashley hardly mentions the Puritan leaders, this volume helps us to understand the historical setting of many of the great Puritan pastors and writers like John Owen, John Bunyan, Thomas Watson, and Jeremiah Burroughs, just to name a few.  As a lover of history, I thoroughly enjoyed reading this book.