The Life and Times of Cotton Mather 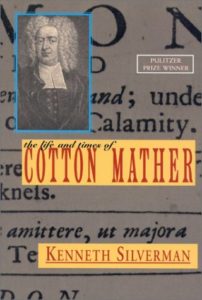 Description of author:   Kenneth Silverman (1936 – ) is professor emeritus at New York University.  He gained the Pulitzer Prize in 1984 for this biography of Mather.

Comments:  This was an exceptionally interesting biography of an exceptionally interesting man.  Cotton Mather (1663-1728) was arguably the first truly great American.  In his concluding chapter, Silverman writes:  Mather looms disfigured but large, that is, in part because he stands alone.  Many of the beliefs attached to his name and scorned were after all shared by thousands of other settlers whose names few remember.  But no other person born in America between the time of Columbus and of Franklin strove to make himself so conspicuous – strove, more accurately, to become conspicuous as an American.  For he looked out eagerly from the New World on major intellectual developments abroad, aspiring to contribute to them by capitalizing on the limitations of provincial life . . . The titles of some of his major works – ‘Biblia Americana’, ‘Magnalia Christi Americana’, ‘Curiosa Americana’, ‘Psalterium Americanum’ – announce his affection for the place and his hope of putting America on the cultural map . . . he was the first unmistakably American figure in the nation’s history (p. 425-26).

Cotton Mather’s name represented two of the most famous families in Puritan New England.  His father was Increase Mather (1639-1723), who was the most famous preacher in Boston up to that time and involved in the administration of Harvard.  Cotton’s grandfather, Richard Mather (1596-1669) had come to Boston in 1635, only five years after the arrival of the Puritans in the Massachussets Bay Colony.  In 1648 Richard drafted the famous Cambridge Platform which defined the form of church government for Puritan New England.  On the other side, Cotton Mather was named for his maternal grandfather John Cotton (1585-1652) who was the preeminent minister in the Massachussets Bay Colony when he arrived in 1632.

Cotton Mather was a graduate of Harvard, a minister of Boston’s North Church alongside his father, a prolific author (450 books and pamphlets), and a scholar.  He was also heavily involved in the politics of Puritan New England.  He carried on correspondence with some of the great men of his day both in America and in Europe and was accepted into the Royal Society of London though he had never been to England.  He was the most ardent advocate of inoculation for smallpox in 1721-22 when Boston faced an epidemic.  Cotton is perhaps best known for his support of the Salem witch trials.

Silverman’s biography is a fascinating read.  You must keep in mind that Silverman is writing from a secular perspective, so he finds the theology of Mather (literal understanding of the Bible, Calvinism, etc.) to be strange and backward.  But in all fairness, Silverman is balanced in his portrait of Cotton.  He also has a tendency at points to psychologically analyze Mather (a great personal annoyance to me).  But, these drawbacks notwithstanding, this is a great book that gives us a glimpse not only of a central figure in our early history, but also of Puritan New England in general and early Boston in particular.