The Practice of the Presence of God 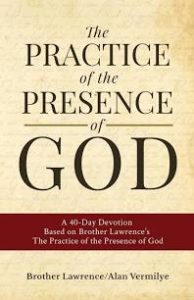 Description of author:   Brother Lawrence (1614-1691) was a monk.  Nicholas Herman was born in the Lorraine region of France.  After fighting in the Thirty Years War, he entered a Carmelite monastery in Paris in 1640 and took the religious name Lawrence of the Resurrection.

Comments:  Over the years I have heard references to and quotes from this little work.  Recently I have been asked by several people about this book.  So I finally read it.  As I read it, I was somewhat amazed that evangelical Christians would recommend it (as so many do these days).  I will, therefore, take the time to critique this ‘Christian classic’ in some detail, using it as an exercise in discernment.

I will begin by observing that two things struck me immediately, before I ever opened the book.  First, the author goes by the title ‘Brother’ . . . obviously he is a Roman Catholic monk.  Second, I would observe the word practice in the title.  Practice implies method.  You cannot practice the presence of God.  There is no method to take one into the presence of God.  This word practice implies a pagan, mystical approach to God.  Therefore, before I opened the book, I was whole-heartedly expecting to find Roman Catholic mysticism.  When I opened the book, I was not disappointed.

Assuming that one knows almost nothing about Biblical theology, there is one most obvious attribute of this volume that should cause one’s doctrinal red flags to fly high or one’s discernment bells to start ringing loudly.  Brother Lawrence uses no Scripture.  If I am reading a book about identifying flowers or how to raise guinea pigs, that’s not a problem.  But it seems to me there is only one authority about God’s presence and that would be God’s Word.  If I ask the question, “What does the Bible say about God’s presence?”  I will find that the Bible has a lot to say about that.  It is not my purpose to answer that question at this time, but I would take notice of two major doctrines in the Bible regarding God’s presence:  (1) the substitutionary death of Christ on the cross opened the door into the presence of God (Hebrews 10:19-21).  In other words, as Christians who have placed our faith in Christ, we live in the presence of God, we don’t have to practice it; and (2) the Holy Spirit indwells every believer (Romans 8:9).  The Holy Spirit is God in us . . . again we do not (indeed cannot) practice the presence of God.  We have His presence always.  Strangely, Brother Lawrence doesn’t really consider these two doctrines and in fact much of what he writes contradicts them.

I will now give a short list of some of the obvious doctrinal heresies present in the book:

(1)  He teaches mysticism.  Perhaps I should define mysticism.  It is direct communion with God apart from the rational.  It is pure experience (emotional, sensual) usually arrived at by a method and is generally divorced from thinking.  I should point out that mysticism always bypasses simple faith in the finished work of Christ on the Cross and repentance from sin.  Method trumps or rather replaces faith. He writes:

Since you desire so earnestly that I should communicate to you the method by which I arrived at that habitual sense of God’s presence, which our Lord, of His mercy, has been pleased to vouchsafe to me . . . (p. 25).

Now I observe that he is speaking of attaining a ‘habitual sense of God’s presence.’  In other words he is attaining, by a method, a feeling (of peace) that he mistakes for the presence of God.  Biblically speaking, God’s presence is not something you feel.  But notice also, this method is something that the Lord revealed to him personally.  This is not something Brother Lawrence found in Scripture.  Observe other examples:

And I make it my business only to persevere in His holy presence, wherein I keep myself by a simple attention, and a general fond regard to God, which I may call an actual presence of God; or to speak better, an habitual, silent, and secret conversation of the soul with God, which often causes in me joys and raptures inwardly, and sometimes also outwardly, so great that I am forced to use means to moderate them, and prevent their appearance to others (p. 31).

And then it seems to him (as in effect he feels it) that this God of love, satisfied with such few words, reposes again, and rests in the depth and center of his soul.  The experience of these things gives him such an assurance that God is always in the depth or bottom of his soul, and renders him incapable of doubting it upon any account whatever (p. 38).

There are three degrees of union of the soul with God.  The first degree is general, the second is virtual union, whilst the third is actual union (p. 77).  (He seems to be describing the heresy found so often in the early church fathers called theosis).

The presence of God is thus the life and nourishment of the soul, and with the aid of His grace, it can attain thereunto by diligent use of the means which I will now set out (p. 81).

By the practice of the presence of God, by steadfast gaze on Him, the soul comes to a knowledge of God, full and deep, to an Unclouded Vision (p. 88).

In the way of God, thoughts count for little, love is everything (p. 98).

In all his meanderings he says almost nothing about Scripture, doctrine, sin, renewing the mind according to the Scriptural model or, most importantly, the blood of Christ as the means of our acceptance into the presence of God.

(2)  He teaches salvation by works.  Brother Lawrence’s method is for him clearly a means of atonement for his sins.  He repeats this idea several times in the book:

This made me resolve to give the all for the All, so after having given myself wholly to God, to make all the satisfaction I could for my sins, I renounced, for the love of Him, everything that was not He; and I began to live as if there was none but He and I in the world (p. 26).

I took a resolution to give myself up to God, as the best satisfaction I could make for my sins; and, for the love of Him, to renounce all besides (p. 29).

Since entering upon the religious life, I no longer perplex myself with thoughts of virtue, or of my salvation.  But having given myself wholly to God, to make what satisfaction I could for my sins . . . (p. 99).

(3)  He teaches asceticism (which is an aspect of mysticism).  Asceticism is the notion that there is spiritual merit in denying oneself pleasure or in experiencing self-induced pain.  He writes:

There is no one but must avow that God is beyond our understanding.  To be united to Him it is needful therefore to deny to the will all tastes and pleasures, bodily and spiritual, that, thus detached, it can be free to love God above all things (p. 78).

Remember that to attain to this state, we must control and master the senses, inasmuch as no soul which takes delight in earthly things can find full joy in the presence of God.  To be with Him we must leave behind our animal nature (p. 85).

In relating the circumstance of his death, the editor writes of Brother Lawrence:  His one desire was that he might suffer something for the love of God, for all his sins . . . Purposely he bade the brethren to turn him on to his right side; he knew that this position gave great pain, and therefore wished to remain therefore to satisfy his burning desire to suffer (p. 104).

There is virtually nothing Biblical regarding God’s presence in this book.  I would studiously avoid it.  If you would like to understand God’s presence and the Christian I would recommend a serious study of Romans and Hebrews in the Word of God.