Daniel’s Prophecy of the Seventy Weeks 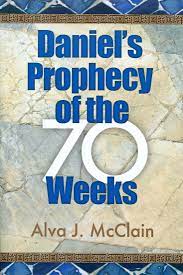 Description of author:  Alva J. McClain (1888-1968) was the founder and first President of Grace Theological Seminary in Winona Lake, Indiana.

Comments:  The prophecy of the 70 weeks of Daniel (Daniel 9:24-27) is one of the most intriguing and difficult passages in the Bible.  It is the only prophecy in the Bible that deals with the specific timing of the coming of the kingdom.  This passage is also one of the cornerstones of the Dispensational understanding of eschatology, particularly in regard to the seven year Tribulation.  McClain’s brief treatment is an excellent introduction to the Dispensational interpretation of Daniel’s prophecy.  He reiterates Sir Robert Anderson’s explanation of the first 69 weeks as concluding at the Triumphal Entry on April 6, 32 A.D.  He also clearly articulates the necessity of a gap of undisclosed time between the 69th and the still future 70th week.  McClain’s work is clear, very readable, and relatively easy to understand.  Today, most scholars would take issue with Christ’s crucifixion occuring in 32 A.D.  Harold Hoehner has since revised and updated the calculations to an 33 A.D. crucifixion, correcting Anderson’s error of dating Artexerxes decree in 445 B.C. rather than 444 B.C. (Chronological Aspects of the Life of Christ, 1977).