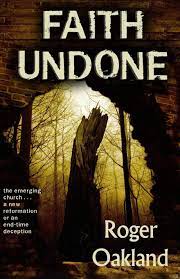 Description of author:  Roger Oakland is an author and lecturer and the founder of Understanding the Times International.

Comments:  The sub-title of this book summarizes its query:  the emerging church . . . a new reformation or an end-time deception.   His conclusion is the latter.  The emerging church movement is taking evangelicalism by storm even though many people do not even know what it is.  It is difficult to succinctly define the emerging church, but it could perhaps best be described as post-modernism in the church.  In other words, increasingly, churches do not believe in absolute truth as a concept . . . or at least in the preaching of it.  It sounds really strange, considering the Bible’s emphasis on, and claims regarding, truth (e.g. John 14:6; Titus 1:1; 2 Tim. 2:25; 1 Pet. 1:22).  But we are being told that objective, propositional truth was a modern idea, a product of the Enlightenment.  And since nobody believes in truth anymore, fundamentalism, we are informed, is wasting its time preaching about the truth.  So we are no longer supposed to be certain or dogmatic about what the Bible says or means.  Everyone is on a journey of discovery, but no one can be certain about truth.  That is the negative side of the movement – its denial of truth.  The positive side (positive, not in the sense of good, but in the sense of what it affirms) of the movement is mysticism.  The emphasis is on experiencing God, particularly with the five senses. This often includes the return of all things Roman Catholic, like candels, incense, and liturgical devices.

In this critique, Oakland especially emphasizes the mystical aspect of this movement and its tendency toward drawing people back toward Roman Catholicism.  He writes, While various Christian media, apologists, and others write criticisms and discuss concerns about the emerging church, there is often an unexplainable and alarming failure to discuss the mystical element.  It is alarming because mysticism is rooted in panentheism (God is in all things) and pantheism (all is God).  Since mysticism is the very steam that drives the emerging church, to exclude it from critique is to side-step the real danger of this movement (p. 102-3).  Oakland identifies some of the roots of this movement, some of the major people promoting the movement (Brian McLaren, Leonard Sweet, Rick Warren, Dan Kimball, Doug Pagitt, etc.), and some of its lingo (multi-sensory worship, ancient-future faith, vintage worship, a new reformation, etc.).  He describes and explains many of the dangerous aspects of the emerging church including contemplative spirituality and ecumenism.  Two of the most interesting chapters of the book, from my perspective, are (1) the chapter on eucharistic evangelization (chapter 8) which describes how the Catholic Church is using the eucharist as a means of evangelizing through the emergent movement; and (2) the chapter on the kingdom of God on earth (chapter 9), in which he describes the emergent movement’s goal and its corresponding abhorrence of literal, futuristic, apocalyptic Bible prophecy.  I recommend this book because it describes what we, as Bible believing Christians, will increasingly face in the coming years.