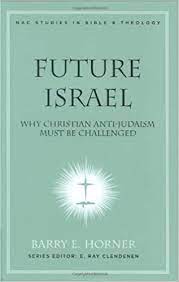 Description of author:  Barry Horner is the pastor of Christ’s New Covenant Church in Sahuarita, Arizona.

Comments:  I purchased this book because of the review of John MacArthur who wrote, among other things, ‘This is by far the best treatment of Israel’s future I have found.’  This is an exceptional book.   Horner seeks to explain the roots of and the problems with replacement theology.  Replacement theology is the idea that the church has replaced Israel in all the covenant promises of the Old Testament and that God has permanently rejected the Jews as a nation.  Replacement theology, also known as supercessionism, finds its roots in Augustine (4th century AD).  This view was the basis of Roman Catholic ecclesiology and was inherited by Luther and Calvin in the time of the Reformation (16th century) and generally by the Reformed tradition up to the present time.  Horner, of course, deals with all the normal issues, like the principals of interpretation in Old Testament passages (e.g. Jeremiah 31 and Ezekiel 36 where the future of national Israel is so plainly promised), spirituality versus materiality in relation to the kingdom promises of the Old Testament, and the meaning of Romans 11.  But he approaches the topic from a very interesting and compelling angle.  He begins by pointing out the very pro-Jewish attitude of the Apostle Paul.  The first line of chapter 1 reads:  That Paul, the apostle to the Gentiles, was decidedly pro-Israel in his ministry is often neglected . . . Furthermore, it is clear from Romans 9-11 that the present status and future destiny of unbelieving national Israel in general, apart from a remnant of Jewish Christians, was a matter of passionate, unrelenting, even primary concern for Paul (p.1).  He argues persuasively that the Augustinian model of replacement theology has consistently led to an anti-Jewish sentiment within the church.  A significant portion of the book is devoted to exposing the anti-Jewish flavor of the writings of those who hold to an Augustinian eschatology.  He contrasts this with the pro-Jewish flavor of other men in the Reformed tradition who believed that God would fulfill the Old Testament promises with national Israel.  The warm desire for the salvation of the Jews that characterized the ministries of men like Charles Spurgeon, Horartius Bonar, Robert Murray M’Cheyne and J.C. Ryle was a refelction of their eschatology.  He argues that a truly Biblical eschatology should result in a Pauline attitude toward the Jewish people.  The last paragraph of the book is an excellent summary of his main thrust:  In conclusion, we return to a most vital matter in the current debate over the future destiny of national Israel.  It is the question of tone or attitude with regard to the Jewish people.  Sadly it needs to be pointed out that much of the literature which continues in the Augustinian eschatological traditions is fatally flawed at this most vital juncture.  This anti-Judaic genre resounds with an unsavory character that most Jewish Christians and unbelieving Jews will quickly identify with a sense of revulsion.  The result is that a basic defect in the whole system is discovered.  By contrast, consider the preceding brief article by Horatius Bonar which throbs and breathes with a gospel that generates a loving regard for the Jewish people and that speaks for itself as being essentially Pauline.  If this chord does not resonate in the Biblical Christian, then without apology it is maintained that the fundamental, doctrinal, eschatological root here is unsound.  It is the right theological, eschatological root which produces from the likes of Bonar such a sweet resonance that both the Jewish Christian and the Gentile Christian will delight in and spontaneously, fervently act upon (p. 331).  He also adds 5 appendices including:  ‘Jonathan Edwards and the Future of Israel’ (p. 333); ‘J.C. Ryle and the Future of Israel’ (p. 339) and an ‘Annotated Bibliography of Jewish-Christian Relations in Church History’ (p. 361).  An author index, subject index, and Scripture index are included.  For many years I have been deeply concerned about the apathy toward eschatology in Reformed circles.  I hope many will read this book.  Horner’s book is worth the price just for the quotes from J.C. Ryle in Appendix B and the quotes from Horatius Bonar and Charles Spurgeon throughout.