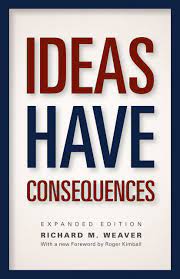 Description of author:  Richard Weaver (1910-1963) taught English at the University of Chicago.

Comments:  This book was not written by a believer.  Weaver writes about American culture just three years after the close of World War II.  The pessimism that pervades its pages is certainly not completely unrelated to the cultural catastrophes of Germany and Japan which were just beginning to be understood.  Yet his pessimistic critique is stunningly relevant for today.  Looking back he almost speaks as a prophet (eerily so).  It is hard to believe he is writing in 1948.  As you read you have to keep in mind he is writing before the rock music of the 50s, the sexual revolution of the 60s, or the all-out pursuit of materialism that has marked the last 30 years of American culture.  In the first six chapters (1-6) he explains the decline of our culture and in the last three chapters (7-9) he suggests a remedy.  The first paragraph of the seventh chapter is a good summary of his thesis:  The foregoing chapters have been concerned with various stages of modern man’s descent to chaos.  Beginning with the first yielding to materialism, we have seen a train of consequences proceeding, in the same way that conclusions come from premises, to the egotism and social anarchy of the present world.  The topic now changes, for the fact of one’s writing signifies that he admits no necessity for these things.  The remaining chapters therefore present means of restoration (p. 129).  He begins with the problem of the denial of the transcendent and the acceptance of empiricism:  The issue ultimately involved is whether there is a source of truth higher than, and independent of man; and the answer to the question is decisive for one’s view of the nature and destiny of humankind . . .The denial of universals carries with it the denial of everything transcending experience [i.e. empiricism].  The denial of everything transcending experience mean inevitably . . . the denial of truth.  With the denial of objective truth there is no escape from the relativism of ‘man the measure of all things’ (p. 3-4).  The moral catastrophe that is present day America is described in astonishing accuracy:  We approach a condition in which we shall be amoral without the capacity to perceive it and degraded without means to measure our descent . . . We rejoice in our abandon and are never so full of the sense of accomplishment as when we have struck some bulwark of our culture a deadly blow (p. 9-10).  The sad thing is that these statements could well describe the church.  His conclusions are sobering, especially in light of what has taken place in our culture in the sixty years since the writing of this book.  For example:  When masses of men reach a point at which egotism reigns so blandly, can their political damnation be far distant?  They have rejected their only guaranty against external control, which is self-discipline, taught and practiced . . . An ancient axiom of politics teaches that a spoiled people invite despotic control.  Their failure to maintain internal discipline is followed by some rationalized organization in the service of a single powerful will.  In this particular, at least, history, with all her volumes vast, has but one page (p. 91).  He points out the profound danger in Hollywood, which, to this day, most evangelical Christians have not figured out:  That the public as a whole misses the issue of the motion picture’s influence can be seen from its attitude toward censorship.  For what the public is reconciled to seeing censored are just the little breaches of decorum which fret bourgeois respectability and sense of security.  The truth is that these are so far removed from the heart of the problem that they could well be ignored.  The thing that needs to be censored is not the length of the kisses but the egotistic, selfish, and self-flaunting hero; not the relative proportion of undraped breast but the flippant, vacuous-minded, and also egotistic heroine.  Let us not worry about the jokes of dubious propriety; let us rather object to the whole story, with its complacent assertion of the virtues of materialist society . . . A censorship of the movies, to be worthy of the name, would mean a complete reinterpretation of most of their themes, for the beliefs which underlie virtually every movie story are precisely the ones which are hurrying us on to perdition (p. 101).  Weaver’s remedies include (1) reaffirming the right of private property; (2) recovering an appreciation for language; and (3) recovering piety and justice.  As a Christian, I do not find Weaver’s remedies to be very convincing.  The truth is that unless man receives the Bible as God’s revealed Word, he has NO place to stand.  Who gets to decide what is truth?  No man gets to determine the truth.  Only God can do that.  And the way He does that is special revelation.  But alas, man is still believing Satan’s lie:  Yea, hath God said . . . ?  The only thing that could possibly delay the utter destruction of our culture is the unadulterated, bold, and definitive preaching of the Word of God throughout the land.  May God raise up preachers of the Truth.