Israel and the Church 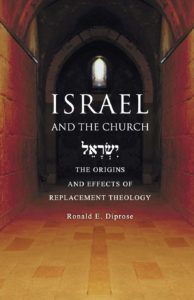 Description of author:  Ronald E. Diprose is Academic Dean at the Istituto Biblico Evangelico Italiano in Rome and editor of the theological journal Lux Biblica.

Comments:  The subtitle of this book describes succinctly the author’s purpose:  ‘The Origin and Effects of Replacement Theology.’  The identification and problem of replacement theology is stated by Diprose in the introduction:  The absence of Israel in much of Christian theology has a long history.  During the formative period of the Christian tradition, the common view was that what was promised to Israel found its ultimate fulfillment in Jesus, the Israelite par excellence.  It follows that the Church completely and permanently replaced ethnic Israel in the working out of God’s plan as the recipient of Old Testament promises originally addressed to Israel.  Although this view, variously known as supersessionism or replacement theology, is now widely rejected, both popular opinion and Christian theology remain profoundly influenced by it (p. 2).

In chapter 1 the author describes the uniqueness of the nation of Israel in both the Old and New Testament.  Israel is promised eternal existence as a nation in the Old Testament (Jer. 31:35-37) and her continued election is guaranteed in the New Testament (Rom. 11:28).  Concerning the latter verse he writes:  In light of the conclusion in v. 28, we can safely say that Paul also is confirming the election of Israel despite the nation’s failure to recognize Jesus as their Messiah.  Nothing, not even their opposition to the gospel, could cancel special love of God for his people.  It is this election of Israel which makes her eschatological salvation certain (p. 20-21).

He then, in chapter 3, traces out the development of replacement theology in the early church fathers including Justin Martyr (p. 74), Irenaeus (p. 77), Tertullian (p. 78), Origen (p. 81), Augustine (p. 87), and John Chrysostom (p. 89).  In his insightful conclusion to this chapter (p. 96-98) he writes the following concerning the use of the Old Testament by the early church fathers:  Such allegorical interpretation of the Old Testament effectively disinherits Israel of their Scriptures.  James Parkes makes this general statement concerning the Church’s reading of the Hebrew Scriptures:  ‘For the Gentile Church the Old Testament no longer meant a way of life,  a conception of the relation of a whole community to God, but a mine from which proof texts could be extracted.  Instead of being the history of a single community, and the record of its successes and failures, it became the record of two communities, the pre-Incarnation Church symbolized by the Hebrews, and the temporary and rejected people of the Jews.  Out of this artificial separation of history into two parts, on the simple principle that what was good belonged to one group and what was bad to the other, grew the caricature of the Jew with which patristic literature is filled’ (p. 97).

The ramifications of this thinking are explored in chapters 4 and 5.  Diprose explains how replacement theology naturally contributed to viewing the Lord’s Table as a sacrifice (the Mass) rather than as a remembrance, the clergy as priests rather than as elders, and the Millennium as the present reign of Christ in the church (Amillennialism) rather than a future, literal kingdom on the earth (Premillennialism).

In his conclusion (p. 169-173) he enumerates two general principles emerging from his study:  (1) Failure to reflect seriously on Israel in light of all the relevant biblical data has serious consequences for the entire enterprise of Christian theology (p. 171); and (2) Christian theology must be based on sound hermeneutical principles which presuppose the Church’s essential relationship with Israel.  These include taking into account the whole of the biblical Canon, taking seriously the Jewishness of Jesus and of much of the New Testament, recognizing the institutional distinctions between Israel and the Church, avoiding gratuitous allegorization of Scripture, and giving normative value to what the New Testament teaches concerning both the first and second advents of Christ (p. 172).

In the Appendix, Diprose describes and responds to the more recent view that Israel and the Church each have their own covenant and that it is not necessary for Israel to recognize Christ as their Messiah in order to experience salvation.  He points out the obvious problems this new view encounters with Biblical Christology and soteriology.  This fine work has copious end notes, an extensive bibliography, and a subject index.