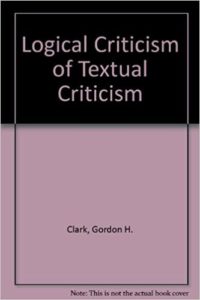 Description of author:  Gordon Clark (1902-1985) was an American philosopher and Calvinist theologian.  He was the chairman of the philosophy department of Butler University for 28 years.  He was also an ordained minister in the Presbyterian Church.

Comments:  Textual criticism is the process by which ancient manuscripts of Scripture are compared and analyzed in order to arrive at the original text (we don’t have any original manuscripts with the handwriting of the Apostle Paul or Peter or John).  It is a very complex and difficult task that is both a science and an art.  This little book addresses some of the principles by which these choices (between different readings) are made.  He writes:  this study aims generally to support the King James version as being better or at least as good English as the new versions (p. 4).  He is not suggesting that the KJV is in any way inspired or perfect, nor is he disparaging all new versions.  But he is suggesting that the rules followed by the modern textual critics (which account for many of the differences from the KJV) are, at least at some points,  logically flawed.  I think he does an excellent job of proving his point in such a brief booklet.  He accomplishes the task by looking at example after example in the New Testament.

Clark addresses two rules of textual criticism in particular that I must admit I have often questioned myself over the years, in regard to their logical validity.  Modern critics will give more weight to one or two manuscripts, such as Sinaiticus or Vaticanus, than to scores of Byzantine or majority manuscripts, simply because they are older.  Clark explains the issue:  If a score or two score manuscripts have a single ancestor, it implies that a score or two score copyists believed that ancestor to be faithful to the autographs.  But if a manuscript has not a numerous progeny, as is the case with B’s [Vaticanus] ancestor, one may suspect that the early scribes doubted its value (p. 15).  And again . . . that the numerical superiority of the Byzantine text might have been due to its early widespread acceptance of that type as being closest to the autographs does not seem to impress [the critics] (p. 32).   Textual critics also almost always favor the shorter of two readings arguing that scribes would be more likely to add words, in order to harmonize a text with other passages or to combine variant readings, than to leave words out of a text.  It is also true that the Byzantine text almost always has the longer readings.  I like Clark’s briefly stated concern:  . . . the critics are wedded to the idea that the shorter readings must nearly always be the originals.  Having suffered at the hands or finger of various typists, I cannot accept this criterion.  They more often omit words and phrases than make additions (p. 23).

Although this booklet will be helpful to the layman, it might be a little difficult if this is the first thing you have ever read on textual criticism and the New Testament manuscripts.  I found it to be very interesting and thought-provoking.