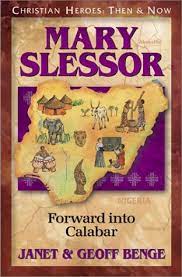 Description of author:  Janet & Geoff Benge are a husband and wife writing team.  Janet is a former elementary school teacher and Geoff has a degree in history

Comments:  Mary Slessor (1848-1915) labored for thirty-nine years among the unreached tribes of Calabar (Nigeria).  Born in Scotland, she left for Calabar as a Presbyterian missionary at the age of 28.  Her great desire from the beginning was to take the Gospel into the interior regions of Africa where there had been no witness.  Her hero was David Livingston.  Eventually she was permitted to go and live among the Okoyong tribe, a hostile, unreached group.  Mary risked her life many times as she intervened in ancient tribal customs in order to save lives.  God protected her and used her greatly as she ministered with unusual boldness and energy.  She came to be well-known and respected by all the tribes in the region and was often consulted by tribal chiefs in resolving problems and conflicts.