The Days of His Flesh 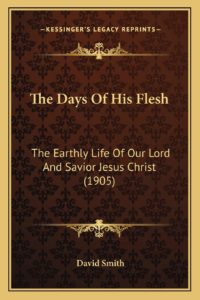 Description of author:   David Smith was professor of theology at Magee College, Londonderry.

Comments:  This account of the life of Christ is written as a narrative with commentary, somewhat in the vein of Edersheim’s Life and Times of Jesus the Messiah.  Tracing the Gospel accounts from His birth to His ascension, Smith pieces together the various details into a running narrative, that, although highly interpretive at points, is both enlightening and interesting. Some of the most interesting parts of the book include (1) the description of Jesus’ sabbath-breaking (p. 131 ff.); (2) the equating of Mary of Bethany with Mary Magdalene and  the sinful woman in Luke 7 (p. 202 ff.); and (3) the explanation of ‘the first shall be last’(p. 354-366).  Smith’s chapters on the trials and crucifixion of Jesus (chapters 46-49) are both highly clarifying and deeply moving.

The one glaring down side of the book is Smith’s less than adequate view of Inspiration.  Although, on the whole, Smith takes the Biblical evidence at face value, his view of accomodation appears occasionally.  It is argued early on in the book that Jesus accomodated the ignorance of His day.  The clearest explanation of this theory appears in his discussion of demon possession (p. 105-109):  [Demon possession] is of course simply a fantastic notion of a dark age unskilled in natural science, and it was nothing strange that the people of the New Testament should have entertained it.  But it is disconcerting that it seems to have been entertained by Jesus also.  When He healed a demoniac, He would address the supposed demon, rebuking it and commanding it to come out of the man . . . When a physician has to deal with such a case, he does not reason with the patient, but rather humors him.  And Jesus dealt with the demoniacs after the manner of a wise physician.  He did not seek to dispel their hallucination.  He fell in with it and won their confidence (p. 105, 107).  In other words, Smith is saying the so-called demon-possessed were not really demon-possessed, but Jesus went along with their belief in order to avoid needless confrontation.  Other examples of this view of accomodation appear in his explanation of the casting of the demons into the swine (p. 191 ff) and Jesus’s use of Psalm 110 (p. 409-10). I should also point out that since the book was written roughly a century ago, the scholarship is somewhat dated. His footnotes include many references to Lightfoot, Wetstein, Farrar and Edersheim, all notable 19th century scholars.