The Freedom of the Will 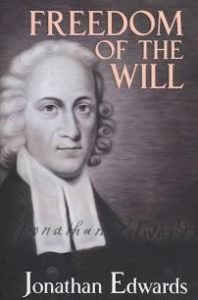 Description of author:   Jonathan Edwards (1703-1758) was arguably the greatest theologian in American history.  He pastored the church at Northampton, Mass. from 1724-1750.  He was one of the primary preachers in the Great Awakening in the 1730s and 1740s.

Comments:  This is perhaps the most important of all the writings of Jonathan Edwards.  It is a relentlessly logical and precise argument against the Arminian understanding of free will.  The treatise is divided into four parts.

In Part 1, Edwards defines the important terms in the discussion (will, necessity, inability, etc.) and makes distinctions that are important in the argument.  He defines will as that by which the mind chooses anything (p. 1).  He observes that a man never, in any instance, wills anything contrary to his desires, or desires anything contrary to his will (p. 4), and It is that motive which, as it stands in the view of the mind, is the strongest, that determines the will (p. 6).  His comments and observations are especially interesting in light of the modern psychological concept of the unconscious, which suggests that the will is motivated primarily by things and experiences that are not consciously before the mind.

In Part 2, he reviews the Arminian notion of the freedom of the will and considers whether any such concept is conceivable.  Is the will free in the sense that it is self-determining? (see p. 37).  Here Edwards argues that this concept is absurd since there has to be a cause of the will outside of itself.  How can the will choose all its choices since that would imply a choice before the original choice?  This is a summary of his argument in pages 36-63.  On page 57 he writes, The mind’s being a designing cause, only enables it to produce effects in consequence of its design; it will not enable it to be the designing cause of all its own designs. The mind’s being an elective cause will only enable it to produce effects in consequence of its elections, and according to them; but cannot enable it to be the elective cause of all its own elections; because that supposes an election before the first election.  He then shows the absurdity of the supposed indifference of the will since indifference and volition cannot coexist (p. 63-82).  Choice and preference can no more be in a state of indifference, than motion can be in a state of rest (p. 76).   Edwards summarizes that the liberty of the mind does not consist in indifference, and that indifference is not essential or necessary to it, or at all belonging to it, as the Arminians suppose (p. 82).  He then proceeds to show that man’s liberty (freedom to do what he pleases) is in no way inconsistent with the decrees of God regarding the necessity of all things that come to pass (p. 82-151).  On page 139 he writes And therefore if there be any such foreknowledge, as it has been proved there is, then necessity of connection and consequence is not at all inconsistent with any liberty which man or any other creature enjoys.  And from hence it may be inferred, that absolute decrees of God, which do not at all increase the necessity, are not at all inconsistent with the liberty which man enjoys, on any such account, as that they make the event decreed necessary, and render it utterly impossible but that it should come to pass.  Therefore, if absolute decrees are inconsistent with man’s liberty as a moral agent, or his liberty in a state of probation, or any liberty whatsoever that he enjoys, it is not on account of any necessity which absolute decrees infer.

In Part 3, he considers whether or not the Arminian view of liberty is necessary for moral agency or accountability.  Edwards’ argument is brilliant in this section.  He shows that the necessity of all things (the absolute certainty of all that comes to pass, see p. 15-16), does not negate virtue, praise, moral agency or judgment.  He observes that God is necessarily holy (He can be nothing else), yet He above all is worthy of honor and praise, and so also Christ, who could not sin, is utterly worthy of all praise and honor for His excellence.  Man’s moral inability, on the other hand, does not take away from his responsibility before God.  His answer to the Arminian charge that inability on the part of man is inconsistent with commands and obligation (p. 180 ff.) is extremely illuminating.  He shows that it is the Arminian notion of liberty that is inconsistent with commands and obligations (p. 182-83).  He answers the question of whether or not sincerity makes up for non-performance of duties before God (p. 192-201).  In my opinion, one of the most important sections of the book is section VI of part 3 (p. 201-209).  Here he shows that virtue is impossible under the Arminian understanding of liberty.  This is important especially in our day, because his observations are almost prophetic in relation to how our culture view’s man as a victim.  He writes, On the whole, it appears, that if the notions of Arminians concerning liberty and moral agency be true, it will follow, that there is no virtue in any such habits or qualities as humility, meekness, patience, mercy, gratitude, generosity, heavenly-mindedness; nothing at all praiseworthy in loving Christ above father and mother, wife and children, or our own lives; or in delight in holiness, hungering and thirsting after righteousness, love to enemies, universal benevolence to mankind; and, on the other hand, there is nothing at all vicious, or worthy of dispraise, in the most sordid, beastly, malignant, devilish dispositions; in being ungrateful, profane, habitually hating God and things sacred and holy; or in being most treacherous, envious, and cruel towards men.  For all these things are dispositions and inclinations of the heart.  And, in short, there is no such thing as inherent virtue and holiness, or vice and sin; and the stronger those habits or dispositions are, which used to be called virtuous and vicious, the further they are from being so indeed; the more violent men’s lusts are, the more fixed their pride, envy, ingratitude, and maliciousness, still the further are they from being blameworthy.  If there be a man that, by his own repeated acts, or by any other means, is come to be of the most hellish disposition, desperately inclined to treat his neighbors with injuriousness, contempt, and malignity, the further they should be from any disposition to be angry with him, or in the least to blame him (p. 207-08).  In short, if liberty consists in indifference and ability, the more one is enslaved to sin the less responsible he is before God.  But the Bible (Romans 1) as well as common sense teaches the opposite.

Finally, in Part 4, he examines the various arguments used by Arminians to bolster their view of liberty and to oppose the doctrines of Calvinism.  Perhaps the most important section in Part 4 is his answer to the objection that Calvinism makes God the author of sin (p. 285-303).   Part 4 is followed by a conclusion.  The publisher then includes a letter written by Edwards to a minister of the Church of Scotland wherein he discusses his treatise on the freedom of the will.

This is a difficult, but very important treatise.  In a nutshell, Edwards argues for the necessity of the new birth.  Matthew 7:17-20 summarizes what Edwards argues:  Even so every good tree bringeth forth good fruit; but a corrupt tree bringeth forth evil fruit.  A good tree cannot bring forth evil fruit, neither can a corrupt tree bring forth good fruit.   Every tree that bringeth not forth good fruit is hewn down, and cast into the fire.  Wherefore by their fruits ye shall know them.  Notice the corrupt tree produced corrupt fruit necessarily, but that in no way prevented it from being cut down and thrown into the fire.  Even so the corrupt man makes choices out of his corrupt heart, necessarily, but that in no way makes him less worthy of eternal Hell.