The Gospel According to Jesus (Revised and Expanded Anniversary Edition) 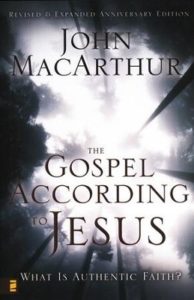 Description of author:  John MacArthur is the pastor of Grace Community Church in Sun Valley, CA and the President of The Master’s College and Seminary.

Comments:  This is probably the most important book John MacArthur has ever written.  It certainly is the one that has caused the most controversy.  First published in 1988, it was revised in 1993, and again revised in 2008.  The only major change from 1993 to 2008 is a new chapter (chapter 1).  The so-called ‘lordship controversy’ did not necessarily begin with this book, but this book succeeded in bringing it front and center in many evangelical circles.  Many dispensational evangelists, pastors, and theologians in the 20th century began teaching some doctrines that were rather suspect to say the least.  These doctrines included the concept that a person could receive Jesus as savior without submitting to His lordship.  A person could receive Christ as savior and then later in life ‘make Him lord.’  In these circles repentance is almost never spoken of in the context of conversion, because that is perceived as a work added to grace.  The emphasis is upon simply ‘making a decision for Christ’, ‘accepting Christ as savior,’ and saying the sinner’s prayer.  If anyone has made such a decision, they should never, ever doubt their salvation.  A corollary to this separation of Christ as savior and lord is the doctrine of the carnal Christian.  This concept, often based on Paul’s terminology in 1 Corinthians 3, makes a distinction between carnal Christians and spiritual Christians.  In other words, there are supposedly Christians that never produce any visible spiritual fruit, but live in a perpetual state of carnality (worldliness and sin), yet they are truly saved because they accepted Christ at some point in the past.  These doctrines are easily traced, at least in part, to the revivalism and the higher-life movement of 19th century Wesleyanism.  They are certainly not Biblical or consistent with historic, orthodox Christianity.

MacArthur, in this book, seeks to refute the error of this teaching by considering the gospel as Jesus preached it in the Gospel accounts.  Several of the key points in regard to Jesus’s teaching include (1) the calls to discipleship in the Gospel accounts are calls to salvation, not calls to some higher commitment; (2) conversion always includes repentance; (3) faith always produces fruit; (4) Jesus never tried to make salvation easy or attractive.  In fact He often turned away some of the most eager ‘seekers,’ like the rich young ruler.

Perhaps the best summary of MacArthur’s thesis is the first paragraph of the first chapter:  ‘Jesus is Lord’ (1 Cor. 12:3).  That is the single, central, foundational, and distinguishing article of Christianity.  It is also the first essential confession of faith every true Christian must make:  ‘If you confess with your mouth Jesus as Lord, and believe in your heart that God raised Him from the dead, you shall be saved’ (Rom. 10:9).  The belief that someone could be a true Christian while that person’s whole lifestyle, value system, speech, and attitude are marked by a stubborn refusal to surrender to Christ as Lord is a notion that shouldn’t even need to be refuted.  It is an idea you will never find in any credible volume of Christian doctrine or devotion from the time of the earliest church fathers through the era of the Protestant Reformation and for at least three and a half centuries beyond that.  The now-pervasive influence of the no-lordship doctrine among evangelicals reflects the shallowness and spiritual poverty of the contemporary evangelical movement.  It is also doubtless one of the main causes for evangelicalism’s impoverishment.  You cannot remove the lordship of Christ from the gospel message without undermining faith at its core.  That is precisely what is happening in the church today (p. 25).

If that paragraph doesn’t make you want to read the book, nothing in this review will.  This is vintage MacArthur.  Clearly, and from the Scriptures, he explains the gospel as Jesus proclaimed it in the Gospels.  There are 24 chapters grouped into five main sections:  (1) Today’s Gospel:  Good News or Bad?;  (2) Jesus Heralds His Gospel; (3) Jesus Illustrates His Gospel; (4) Jesus Explains His Gospel; (5) Jesus Fulfills His Gospel.  He then has 3 helpful appendixes:  (1) The Gospel According to the Apostles; (2) The Gospel According to Historic Christianity; (3) Answers to Common Questions.  The book concludes with a bibliography, Scripture index, and subject index.  This is one of the first books I would recommend to someone who wants to understand what the gospel is or to someone who questions their own salvation.  If you are a true Christian reading this book you will be confirmed by what he writes.  If you are not a true Christian you will be very uncomfortable reading this book.