The Sacrificial System of the Old Testament 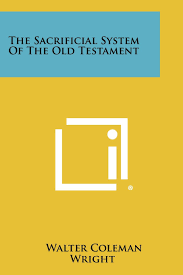 Description of author:  The only description of the author given on the title page is Member American Institute of Accountants.

Comments:  The sacrificial system of Judaism was a very complex and detailed system.  Since that system came to an end completely in A.D. 70, when the temple was destroyed by the Romans, it is difficult for a present day Jew or Gentile to fully appreciate its full ramifications on the day to day culture of the Jews of the Old Testament.  Of course, the whole system pointed to Christ as the New Testament in general and the book of Hebrews in particular make clear.  I have been studying this system in the Pentateuch the past few months and have found it to be quite complicated and enlightening.  Yet I must confess that I am just beginning to understand its significance.  This little book, lent to me by a friend, is a good introduction to the spiritual symbolism of the sacrificial system.  The book includes seventeen short chapters on subjects like ‘The Ark and the Mercy Seat’ (chapter 2);  ‘The Passover’ (chapter 5); ‘The Altars’ (chapter 7); ‘The Fire’ (chapter 9) and one chapter each on the five offerings (chapters 10-14).  It also includes two appendices.  The book is full of little insightful gems that enable the reader to grasp the richness of the symbolism.  For example, in regard to the order of the five offerings in Leviticus 1-7, he writes:  The Peace Offering is central.  It stands in between the Burnt Offering and the Meal Offering on the one hand, and the Sin Offering and the Trespass Offering on the other.  In the Burnt Offering and the Meal Offering we see God in Christ approaching man; in the Sin Offering and the Trespass Offering we see man in Christ approaching God.  In the Peace Offering we have the meeting together of these five offerings and the resulting communion (p. 101).  The Peace Offering was the only offering that had a portion for God, a portion for the priests, and a portion for the offerer (p. 102).  There are a few places where he may have stepped over the boundaries of sound interpretation principles, as in his discussion of the significance of numbers (p. 52).  He makes a very insightful remark regarding the future sacrifices prophesied in Ezekiel:  The objection will be raised by some that the suggestion of a revival of a sacrificial ritual casts a cloud upon the sufficiency and finality of the sacrifice of Christ.  Perhaps if we could remove ourselves to a sufficient distance from these age times in which we live and view every thing from the standpoint of eternity we might be hardly able to distinguish between sacrifices offered up in anticipation of the incarnate acts of redemption and those offered up as a memorial of them . . . The reliance of faith is not upon the symbol in any case.  Moreover, it may be remembered that up to this present time Israel as a nation has never offered up the Divinely appointed sacrifices in a fully intelligent way.  It may be God’s desire that they should do so (p. 169).