A Case for Amillennialism 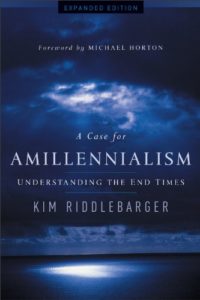 Description of author:  Kim Riddlebarger is pastor of Christ Reformed Church in Anaheim, CA and a visiting professor of systematic theology at Westminster Theological Seminary in CA.  He is also cohost of the weekly radio program White Horse Inn.

Comments:  Many people today think that the issues of eschatology (last things), in general, and Millennialism in particular, are of little or no importance. I disagree with that attitude for several reasons:  (1) Millennialism involves so many passages of Scripture, particularly in the Old Testament prophets; (2) The issue involves questions about important hermeneutical (interpretation) principles; and (3) The issue is apparently quite important to God (Jeremiah 31:35-40; Ezekiel 36; et. al.) – how we understand these passages of Scripture is important.  Having said that, we can discuss the issue civilly and I think Riddlebarger does that in this book.  As a Dispensational Premillennialist, I do not recommend this book because I fundamentally disagree with the conclusions of the author.  But I found it helpful in coming to a more complete understanding of the Amillennial position.

The book is divided into four parts: (1) First Things First (3 chapters) – in which he defines terms and surveys eschatological views; (2) Biblical and Theological Concerns (8 chapters) – in which he basically explains his Covenant Theology and Replacement Theology; (3) Exposition of the Critical Texts (4 chapters) – in which he reviews the most important and controversial texts (Daniel 9, Matthew 24, Romans 11, and Revelation 20); and (4) Evaluation of Millennial Options (1 chapter) – his concluding thoughts.  It has no index of any kind.  Subject and Scripture indexes would make the book more useful.  Riddlebarger, throughout the book, is trying to respond to four other views (which overlap in some points): Dispensational Premillennialism, Historic Premillennialism, Postmillennialism and Preterism.  Admittedly, this is a very difficult thing to do thoroughly in a book that is only 270 pages in length.  However, his familiarity with the literature of Dispensational Premillennialism seems to be extremely limited.  Judging from the footnotes, it seems the only Dispensational author he has any real knowledge of is John Walvoord.  Most startling to me is his apparent complete ignorance of Robert Thomas’ 2 volume, exegetical commentary on Revelation.  In his lengthy discussion of Revelation 20, he does not so much as footnote it.  It is impossible in this brief review to answer all the arguments set forth in the book, but I will address a few.

Aside from the issues of spiritualizing (p. 36-38), Covenant Theology and Replacement Theology, all of which are far too broad to address here, one of Riddlebarger’s most fundamental assumptions is what he calls the two-age model of NT eschatology (see p 89 ff).  There is the present age and the age to come.  The age to come begins when Christ returns.  There can be no Millennium after Christ returns because that would be a kind of in-between stage that doesn’t fit into this dichotomy (I could imagine a Jew of the 1st century, similarly arguing for one coming of the Messiah based on the OT).  This assumption so completely governs his thinking, he writes:  So now we must ask our premillennial friends the obvious question, Where is the one-thousand-year gap between Christ’s return and the final judgment taught in the Scriptures? (p. 233).  I will give the obvious answer . . . Revelation 19-20.  He would surely respond with the analogy of faith, claiming this as an unclear text (see p. 37).  But actually the text is quite straight forward.

Riddlebarger’s handling of Daniel 9:24-27 is extremely unsatisfactory.  After scolding Dispensationalists for careless interpretation of this text (p. 153, 154), he himself shows a great deal of carelessness.  He writes regarding the gap between the 69th and 70th weeks of Daniel:  Where is the gap to be found in the text?  Dispensationalists must insert it (p. 153).  While perhaps not obvious before Christ’s first coming, the gap is clearly present.  In verse 26 the Messiah is cut off (a reference to the crucifixion in A.D. 30) after the 69th week.  Then (before the 70th week of v. 27) the people of the prince (the Romans) come and destroy Jerusalem and the sanctuary (a reference to A.D. 70).  This leaves a logical gap of time between Christ’s crucifixion (A.D. 30) and the 70th week of v. 27, which presumably begins some time after A.D. 70.  This gap is not invented by Dispensationalists.  It was Daniel who made a clear demarcation between the 69th and 70th weeks, with a gap of uncertain length between.  What is especially confusing to me is how Riddlebarger on the one hand claims the 70 weeks terminated at Christ’s first Advent (p. 154), and then argues that it ends at his second Advent (p. 156).    He claims that the final three-and-one-half years of the 70th week . . . are symbolic of the church on earth during the entire time of its existence (p. 156).  This is an interesting interpretation in light of the fact that the first 69 weeks were clearly 69 x 7 years (the Hebrew for weeks is literally sevens, i.e. seventy sevens, not seventy weeks).  He basis this gross inconsistency on Revelation 12:14, where John reinterpreted this three-and-one-half years in Daniel as ‘a time, a times, and half a time’ (p. 155).  Riddlebarger fails to mention the fact that John also refers to the same time period as 1,260 days (Rev. 12:6) and 42 months (Rev. 13:5), both equal to three-and-one-half years.

Riddlebarger’s handling of Revelation 20:1-10 is likewise not very convincing.  I will limit my comments to the issue of the 1,000 years.  He writes:  There are good reasons not to take John’s reference to the thousand years literally.  For one thing, numbers are always used symbolically throughout the book (p. 210).   While I would agree that numbers often have symbolic significance in Scripture, I can’t seem to locate one instance where the number doesn’t mean the number.  In other words, we might agree that 40 is symbolic for testing in Scripture, yet truly the Israelites were in the wilderness for 40 literal years and Jesus was in the desert for 40 literal days.  Riddlebarger gives one supposed example (Revelation 2:10).  Yet this supposed example is by no means clear (see Thomas, Revelation 1-7, p. 168-171 for a thorough, even-handed discussion).  His discussion of Revelation 20 is a classic example of how to deconstruct a Biblical text.  He explains perfectly and in great detail why the text does not say what it plainly says.

His discussions of Romans 11 and Matthew 24 are excellent.  Although I disagree with some of his conclusions, he helps to clarify the issues.  Surprisingly (to me at least), he understands Romans 9:6 (they are not all Israel, which are of Israel) and Romans 11:26 (so all Israel will be saved), as references to ethnic Israel (p. 183-185).  In fact, my understanding of Romans 11, as a Dispensationalist, is very close to Riddlebarger’s.