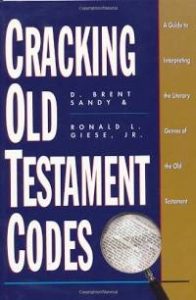 Comments:  This group of essays by leading Evangelical, Old Testament scholars is an introduction to literary forms or genres in the Old Testament.  The first three essays are introductory.  The next ten essays (chapters 4-13) are devoted to the most basic ten genres in the OT (one per chapter):  narrative, history, law, oracles of salvation, announcements of judgment, apocalyptic, lament, praise, proverb, and non-proverbial wisdom.  The final chapter (14) wrestles with the significance of dealing with genre as a pastor or teacher in the local church.  Emphasizing the importance of genre in Biblical studies is a relatively recent development (20th century).  This work provides a helpful introduction to this area of hermeneutics.   It provides the points of identification (e.g. what is the difference between narrative and history?), the characteristics of each genre, and the principles of interpretation applicable to each.   Each chapter concludes with an annotated list of recommended reading – a very helpful guide for anyone interested in pursuing a particular genre in more depth.  The book, on the whole, is excellent, though some of the essays are especially good.  The introductory chapter by Ronald L. Geise, Jr., ‘Literary Forms of the Old Testament’ is an excellent overview; Walter Kaiser’s essay on Narrative (chapter 4), Richard Averbeck’s on Law (chapter 6), and Ted Hildebrandt’s on Proverb (chapter 12) were by far the most enlightening and interesting from my perspective.  There were a few places where I must admit I had to wince; for example when Eugene Merrill, in his essay on History (chapter 5), addresses the issue of  the extent to which the historian was free to embelish the record (p. 103).  Concerning this he writes:  Thus, biblical history is not precluded from critical analysis nor even from the possibility that some imagination was at work in its composition.  But imagination is not synonymous either with error or lack of facticity (p. 104).  This is confusing at best!  Merrill also writes, regarding the devotional content in history:  Most of the stories in the Old Testament will have meaning at least for some readers some of the time, but not necessarily for all readers all the time (p. 106).  This is careless writing at best!  The other concern that I have regarding genre analysis is the overemphasis on finding and comparing contemporary literature.  Does studying the Hammurabi Code (p. 129) actually enlighten our understanding of the Mosaic Law?  Does studying the oracles of Esarhaddon or Ashurbanipal (p. 145) enhance our understanding of Isaiah?  Maybe a little bit, but here I think Evangelical scholars far too often bow at the foot of naturalistic scholarship, which is continually trying to bring Scripture down to the level of other ancient writings.  I rather suspect that Scripture gives us more light on the pagan cultures that existed around Israel than vice versa.  On the whole I recommend this book, especially to those who would teach from the Old Testament.