God in the Wasteland, The Reality of Truth in a World of Fading Dreams 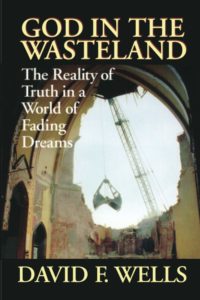 Comments:  This book is the sequel to No Place for Truth (1993, see below), in which Wells offers an explanation of the cultural factors that have diminished the place and importance of theology in the church (God in the Wasteland, p. ix).  In God in the Wasteland, Wells outlines the first step that . . . needs to be taken to reverse the situation [he] described in the first book (p. ix).  The solution that he outlines is fundamentally the recovery of the transcendence of God.  Once again, Wells’ deep insightfulness and keen ability to articulate shine through.  He argues that the basic problem with the church is what he calls the weightlessness of God (see chapter 5):   Because the doctrine is professed, perhaps even routinely in creed or confession, it seems as if all is well.  But it is like a house that gives no outward signs of decay even though termites have rendered it structurally unsound.  The growing weightlessness of God is an affliction that is neither peculiarly Protestant nor peculiarly Catholic but is the common form in which modernity rearranges all belief in God.  It is an illness that has entered the bones of religious liberals and conservatives alike.  Weightlessness is a condition, a cognitive and psychological disposition.  It can sweep through all doctrinal defenses because it is not itself perceived to be a doctrine.  It can evade the best ecclesiastical defenses, sidestep the best intentions, and survive the most efficacious spiritual techniques because it is not recognized as a kind of belief.  Although this weightlessness is not itself a doctrine, it has the power to hobble all doctrines; although it is not an ecclesiology, it can render all ecclesiologies impotent; although it is not itself a spirituality, all spiritualities are withered by its presence.  Weightlessness tells us nothing about God but everything about ourselves, about our condition, about our psychological disposition to exclude God from our reality (p. 90).  This weightlessness is the result of our worldliness:  These changes say a lot about our internal landscape and our worldliness, for a God who has thus lost weight is no longer the God of biblical faith or classical Christianity.  A God with whom we are on such easy terms and whose reality is little different than our own – a God who is merely there to satisfy our needs – has no real authority to compel and will soon begin to bore us.  This is not the God of Abraham, Isaac, and Jacob.  He is scarcely even the God of the philosophers, and certainly not the God of Jesus Christ (p. 92-3).  The first step to recovery is to throw off the consumer mindset of modernity:  The first theme, then, is our need to move away from the prevailing modern anthropology, to convert our understanding of ourselves as consumers of inner experiences and things religious to an understanding of ourselves as moral knowers and actors.  We have turned to a God that we can use rather than to a God we must obey; we have turned to a God who will fulfill our needs rather than to a God before whom we must surrender our rights to ourselves.  He is a God for us, for our satisfaction – not because we have learned to think of him in this way through Christ but because we have learned to think of him this way through the marketplace.  In the marketplace, everything is for us, for our pleasure, for our satisfaction, and we have come to assume that it must be so in the church as well (p. 114).  The church must then regain the lost truths of God’s transcendence and His otherness.  The holiness of God, the authority of God, and the providence of God must all be recovered.  His prognosis for the evangelical church is sobering:  I believe that today’s churches are simply in a transitional period and that if they fail to repudiate their experimentation and repent of its outworkings, the day will shortly be upon us when evangelical spirituality will become indistinguishable from New Age spirituality (p. 222).

His conclusion is as simple as it is profound:  It is God that the church needs most – God in his grace and truth, God in his awesome and holy presence, not a folder full of hot ideas for reviving the church’s flagging programs.  But this is what makes the reform of the church so profoundly difficult.  Church facilities, landscaping, programs, and liturgies can all be changed – changed overnight and changed over and over again.  The human heart cannot be so easily changed (p. 225).