Losing Our Virtue, Why the Church Must Recover Its Moral Vision 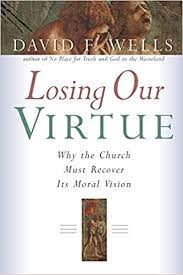 Comments:  This book is the third in the four-book series published by Wells between 1993 and 2005.  I reviewed the first two below and the fourth is on my shelf.  In the first volume, No Place for Truth, he sought to explain why theology no longer has a place in Evangelical churches.  In the second book, God in the Wasteland, he prescribed the remedy:  recover the holiness and otherness of God.  In this third volume, Wells moves from theology proper to anthropology.  In a God-centered (the Biblical God) worldview man is morally accountable, or as Wells explains it, In classical spirituality what is moral is central (p. 34); and again, The most obvious aspect in the configuration of classical spirituality, then, is the role which the Holy has (p. 35).  Where God is no longer central, or as he describes it in God in the Wasteland: where God is weightless, man no longer sees himself fundamentally as a moral being.  Wells observes this reality in our culture and how it is affecting our churches.  He points out the unique situation in which we stand relative to all past cultures:  This is the first time that a civilization has existed that, to a significant extent, does not believe in objective right and wrong.  We are traveling blind, stripped of our moral compass.  And this is true, not only in society, but increasingly in the church as well (p. 17).  He observes the importance of a moral conscience in restricting evil in a society.  Where this moral conscience is lacking, litigation replaces self-restraint.  Law increasingly becomes the restrainer.  This loss of moral understanding is seen in the replacement of character by personality as the defining aspect of an individual, in the replacement of human nature by self-consciousness (p. 96),  in the replacement of guilt (moral culpability before God) by shame (non-moral feeling, before men) (see p. 120 ff), and in the replacement of sin by crime and disease (p. 183).  In his conclusion he points us back to calling sin, sin (p. 196) and to making the Cross of Christ central as the place where the character of God burns brightest and where his resolution of the problem of sin is sounded for all time (p. 205).  There is a sense in which the central observations and conclusions of Wells are obvious to any thinking person, yet surely he gives a deep insight into our culture and the problems facing the 21st century church.