No Place for Truth or Whatever Happened to Evangelical Theology? 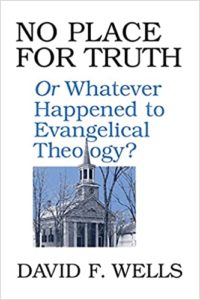 Comments:  In this volume, Wells seeks to explain why it is that evangelical Christianity has lost its passion for theology.  He explains his purpose in the Introduction:  My central purpose is to explore why it is that theology is disappearing . .  It is not theology alone in which I am interested but theology that is driven by a passion for truth; and it is not evangelicalism alone in which I am interested but evangelicalism as the contemporary vehicle for articulating a historical Protestant orthodoxy.  Why has this linkage between the past and the present broken down? Why has the passion for truth diminished?  Why is it that contemporary evangelicals suppose their faith will survive intact without this passion and this theology?  (p. 12).  His answer to these questions fundamentally comes down to worldliness:  The stream of historic orthodoxy that once watered the evangelical soul is now damned by a worldliness that many fail to recognize as worldliness because the cultural innocence with which it presents itself (p.11).  In the first two chapters of the book, Wells defines the problem as he sees it.  In chapters 3-5, he expands and explains in more detail the problem laid out in the opening chapters.  In the final three chapters (6-8), he explains how modernity has affected pastoral ministry (see p. 13 for his outline and summary).

Wells argues that the church has drunken so deeply at the well of modernity that its very mindset precludes any real passion for doctrinal truth.  In his trenchant description of modernity (chapter 2:  World Cliché Culture, see especially p. 72 ff.), he explains how modernity is not neutral and how it militates against Christian truth.  He explains how the novelty of Our Time . . . lies not so much in the fact that it is modern as in three other considerations.  First, modern consciousness is being shaped by a world civilization . . . A civilization that is global in its nature is stripped of all the particularities of any one culture.  It belongs to no particular time, place, or people . . . Second, today’s mass media, which are vital conduits for values arising from modernization, are so intrusive, so pervasive, so enveloping as to render experience of modernity intense to a degree that is without precedent . . . Third, as a consequence, we are seeing on a social scale that is without precedent the mass experimentation with and adoption of the values of modernity (p. 89-90).  The result of evangelicals taking in this global, secular, pluralistic, self-centered culture has been the reshaping of the Christian life, church life, and especially pastoral ministry after the models of modernity:  As the nostrums of the therapeutic age supplant confession, and as preaching is psychologized, the meaning of Christian faith becomes privatized.  At a single stroke, confession is eviscerated and reflection reduced mainly to thought about one’s self  That being the case, the responsibility of seeking to be Christian in the modern world is then transformed into a search for what Farley calls a ‘technology of practice,’ for techniques with which to expand the Church and master the self that borrow mainly from business management and psychology.  Thus it is that the pastor seeks to embody what modernity admires and to redefine what pastoral ministry now means in light of this culture’s two most admired types, the manager and the psychologist (p. 101).  He points out that theology reconfigured on the practical is typically therapeutic:  it suggests that Christian faith is mostly about offering wholeness . . . it suggests that relationships are as important as truth in realizing this wholeness, and it is centered on personal happiness quite as much as righteousness (p. 290).

Wells does not address the solution to this problem.  He reserved that discussion for a subsequent volume:  God in the Wasteland, the Reality of Truth in a World of Fading Dreams, 1994.  No Place for Truth is a book that should be read by every pastor and by anyone seriously interested in understanding modern evangelicalism.