The Servant of Jehovah 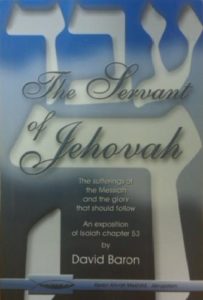 Description of author:  David Baron (1855-1926) was born in Russia and raised in a devout Jewish family.  He studied Hebrew in rabbinical school.  After completing his own study of the Scriptures, he converted to Christianity.  He then devoted himself to explaining Christianity to the Jews and explaining the Jews to Christianity.  He co-founded the Hebrew Christian Testimony to Israel of London and wrote numerous books.

Comments:  Isaiah 53 is often called the Song of the Suffering Servant.  It is arguably the single most important passage in all of Scripture.  This poetically beautiful and moving prophetic account of the coming, rejection, suffering, death and final exaltation of the Servant of Jehovah (the Messiah) is not only important because it predicted and described in detail the crucifixion, but also because it interpreted the crucifixion 700 years before the coming of Christ.  This suffering and death was to be vicarious.  It was to be the means by which the Lord would deliver His people from their sins.  David Baron’s volume is an exposition of Isaiah 53.  It is an excellent introduction to this critical text of Scripture.  While dealing with some technical issues in the Hebrew language, Baron’s work is eminently readable, even to one who has no background in Hebrew.  Though it is a little dated in scholarship (his primary references include Delitzsch, Hengstenberg, and Pusey – all commentators from the 19th century), it remains an insightful and accurate exposition of the text.  He approaches the text from the standpoint of a Premillennialist and understands the we, our and us passages (v. 1-6) primarily as Israel’s future penitential confession (p. 67 ff.; cf. Zech. 12:10).  He also rejects the change of the verb in 52:15 from sprinkle to startle (p. 63-66).   The book is divided into two main parts.  In the first part (4 chapters, 50 pp.) he places the prophecy in its setting (chapter 1) and then reviews the various non-Messianic interpretations, including the ancient Jewish, modern Jewish, and modern rationalistic Christian (chapters 2-4).  The second part (4 chapters, 90 pp.) is an exposition of the text.  He then includes an appendix with readings from the Talmud and Midrashim that make reference to a suffering Messiah.  Isaiah 53 is a text of Scripture with which all Christians should become more familiar.  Reading this book by Baron would be a good place to begin.