A Durable Peace: Israel and Its Place Among the Nations 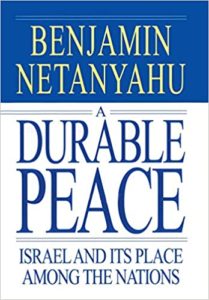 Description of author:  Netanyahu is the leader of the conservative Likud party in Israel and was the Prime Minister of Israel from 1996-1999.

Comments:  The history of the Jewish people is perhaps one of the greatest evidences of the truth of the Bible and the existence of God.  Their dispersion among the nations and their return, almost 2000 years later, to the land is direct fulfillment of the Old Testament Scriptures and a clear indication that the Lord’s return is near (cf. Deut. 30:3; Is. 11:11-12; Ez. 36:23-24; Zech. 8:7-8).  This book, written by an Israeli politician, is an excellent overview of the history of the modern state of Israel and the Arab-Israeli conflict.  Among other important issues, he explains how modern Israel came into being; its relations with the West; how the PLO, a terrorist organization, came to win the support of many in the West; and why the West Bank, the Golan Heights, and Gaza are so critical to Israel’s viability.  The book also contains a very helpful set of appendixes including a chronology, the League of Nations Mandate, The PLO Charter, and the UN Security Council Resolution 242.