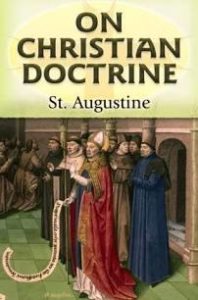 Description of author:  Augustine of Hippo (354–430) is called by some the greatest thinker in the history of Christianity.  Indeed, the evangelical finds much to admire in Augustine.  Calvin and Luther borrowed much of their soteriology from him.  He also wrote the definitive work on the nature of the Trinity (“On the Trinity”).  But, unfortunately, there is almost as much to detest in Augustine as there is to admire.  His writings formed the basis of Roman Catholic ecclesiology and medieval monasticism.  In fact, apart from Thomas Aquinas, it is difficult to think of any individual more important in the development of Roman Catholic theology.  Let us read him with discernment.

Comments:  This work is divided into four books.  The first three were written in 397, the fourth in 426.  His purpose in writing this treatise is stated in the final sentence of the fourth book:  to depict . . . the sort of man he ought to be who desires to labor in sound, that is, in Christian doctrine, not for his own instruction only, but for that of others also.

In general, the first three books are more or less a treatise on Biblical interpretation and the fourth book a treatise on rhetoric, or the communication of divine truth.  The genius of Augustine shines through in this work, both in originality of thought and beauty of expression. Much of what he writes in regard to hermeneutics, this reviewer would most heartily agree with including his emphasis upon love as the foundational principle (book 1, chap. 36, paragraph 40), the need for piety and the fear of God in the life of the interpreter (book 2, chap. 7, paragraph 9), and interpretation of obscure passages by the light of clear passages (book 3, chap. 26, paragraph 26).  He also rightly emphasizes context and sensitivity to figures of speech.  But occasionally the reader will find examples of (in my humble opinion) obscene (figuratively speaking) abuses of allegorical interpretation.  The passage in Song of Solomon that reads:  Thy teeth are like a flock of sheep that are shorn . . .  (4:2) is interpreted as the teeth of the Church, tearing men away from their errors, and bringing them into the Church’s body, with all their harshness softened down, just as if they had been torn off and masticated by the teeth (book 2, chap. 6, paragraph 7).  Great imagination, but deplorable hermeneutics!  For another entertaining example see his explanation of the serpent (book 2, chap. 16, paragraph 24).  His treatise on eloquent speech (book 4) is superb and could be read with great profit by every preacher today.   He emphasizes the fact that eloquence is caught rather than taught (book 4, chap. 5, paragraph 8).  He describes three conditions for eloquence: perspicuity, beauty of style, and persuasive power; and three styles of speech:  subdued, temperate, and majestic (book 4, chap. 26, paragraph 56).  On the whole, I recommend this work of Augustine.