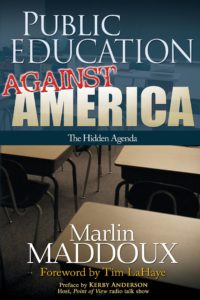 Description of author:  Marlin Maddoux (1933-2004) was the founder and host of Point of View radio talk show and founder and president of the USA Radio Network.  He was also a journalist and author.

Comments:   If you would have asked me a week ago “Should I send my child to public school?”  I probably would have been somewhat ambivalent.  After all I attended public school from 1st through 12th grade and survived (graduated in 1985).  After reading this book I am no longer ambivalent.  My recommendation to parents now, without question, will be to get your child out of public school as soon as you can.  This well-researched, rather sobering book relates how our children are being systematically brainwashed in the public schools.  That term may seem provocative and strong until you actually read this book.  No, this is not a George Orwell novel.  Maddoux relates how our children’s belief systems, received from parents and churches, are being purposely and systematically deconstructed and reconfigured.  The public schools are teaching our children to reject moral absolutes, religious truth, the traditional family and patriotic feelings.  They are being taught moral relativism, evolution, sexual promiscuity and globalism.  The goal is to make compliant citizens of a global society.  The chapter on sex education alone (chapter nine) is enough to make any parent sick to their stomach.  His unequivocal advice is the title of chapter 12:  “Get Your Children Out of the Public Schools!”  After reading the book, I am compelled to echo his counsel.