Why I Left the Contemporary Christian Music Movement 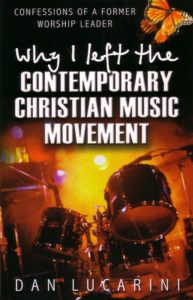 Description of author:  Dan Lucarini is a businessman from Colorado who, for many years, was a worship leader for several evangelical churches.

Comments:  Since I agree with Lucarini’s conclusion – that Christian Contemporary Music (CCM) and Praise and Worship Music (P&W) are not acceptable forms of worship in the church – I tried to read this book from the perspective of an antagonist:  Would this book convince me?  Although he has some very perceptive points and addresses most of the arguments given by promoters of CCM and P&W, I thought he was weakest in his logic at the most important point – the moral quality of the music.  He perceptively points out the hypocrisy of CCM promoters (i.e. they are guilty of the very things they accuse others of), the divisive nature of CCM and P&W, the inevitable sensuality that accompanies the music, and the shallow argumentation of CCM defenders (e.g. “Show me where the Bible says that rock music is evil;”  “Didn’t Luther and Wesley use CCM?”).  But I was left with the impression that CCM ultimately is inappropriate because of its association (e.g. chapters 11, 14) – in other words, rock music is unacceptable because of its undeniable association with the sex and drug culture.  Here I think Lucarini is not near strong enough in his argumentation.  I would go much further:  rock music is not improper for worship because of its association with a culture of rebellion, but rather because it is the very expression of that culture of rebellion – that is, the music is a moral and spiritual expression and has a moral and spiritual effect – and that expression and effect is rebellion.  Take, for example, U2’s song “I Still Haven’t Found What I’m Looking For”  or the Rolling Stones’ hit, “I Can’t Get No Satisfaction.”  The music of these songs is a moral expression that is consistent with the lyrics.  The music without the words reflects and creates the restlessness (i.e. rebellion – cf. Is. 57:20-21) they are singing about.  In the end, I recommend this book.  The church desperately needs men like Lucarini who are willing to take a stand on this issue.