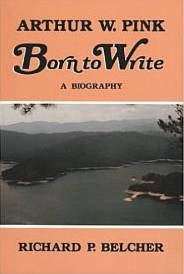 Description of author:  Dr. Belcher is the founder of Richbarry Press.

Comments:  Though I have read several books by A.W. Pink, I had no knowledge of his life before reading this biography.  Pink (1886-1952) was a brilliant man who grew up in a strict Christian home, but never received formal theological training.  As a teeneager he joined the Theosophical Society (spiritualism) and quickly became a leader in the movement (p. 21).  After being soundly converted in 1908 at age 22,  he came to the United States in 1910 and pastored in several Baptist churches  around the country.  He was also a writer and conference speaker.  In 1922 he and his wife, Vera, began publishing Studies in the Scripture, a periodical that would be the most important work of his life.  It became the source of most of the A.W. Pink books published after his death.  After an extended ministry in the U.S. (starting in 1910) and Australia (1925-1928), Pink left America for good in 1934.  He lived in England until moving finally to the Isle of Lewis in Scotland in 1940 to escape the war.  Here he and Vera remained in relative seclusion, publishing their periodical, until his death in 1952.  Vera died in 1962.  Though a brilliant man and a dynamic speaker, Pink was rejected by the church of his generation.  This rejection was partly due to his personality which was blunt and unsociable (p. 58-60) and partly due to his strong stand on the sovereignty of God in an age that was minimizing the same.  His pastorates were short and generally ended badly.  Finally, as a result of his rejection in Australia, he left denominationalism for good in the late 1920s.  As a result he became more and more of an isolationist and seclusionist.  In his letters he fully rejects the generation of Christianity that rejected him.  It was not until after his death that Pink’s writings became well known.  This biography seems to me to be a well-balanced work by someone who clearly admires Pink, yet is quick to acknowledge the faults that accompanied his genius.