The History of Christian Doctrines 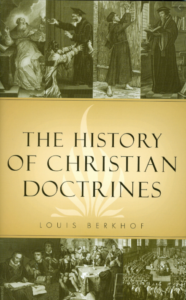 Description of author:  Berkhof (1873-1957) was president of Calvin Theological Seminary in Grand Rapids from 1931 to 1944.  He is most well known perhaps for his Systematic Theology.

Comments:  This volume was meant to be a companion to his Systematic Theology and Introductory Volume to Systematic Theology.  Written from a Reformed perspective, this is an important overview of the development of Christian doctrine.  He begins by distinguishing between doctrine and dogma.  Doctrine is merely the expression of a religious truth, an expression that does not necessarily have authority and may be merely the unscientific expression of an individual. Dogma, on the other hand, is a religious truth based on authority and officially formulated by some ecclesiastical assembly (p. 16).  This distinction, though in some respects helpful, can be a weakness in the Reformed mindset.  This can begin to look a little bit like the Roman Catholic view of authority (i.e. the Church’s authority becomes a rival to the Bible’s authority) .  This distinction, I believe, explains, in part, why Reformed theologians tend to quote the creeds and confessions as though they were equal in authority with the Bible (though they would generally deny their equality).  I believe it also explains their refusal to forsake infant baptism and their rejection of premillennialism, the former being historically formulated and confirmed in the creeds, the other being historically rejected and anathemitized in the creeds.  Having said that, the study of the precise wording of the creeds is an important part of theology  and cannot be ignored or lightly esteemed.  Berkhof’s book is divided into nine sections, based on doctrinal subjects (the Trinity, Christ, the Atonement, etc.), and generally given in the order in which each doctrine became a prominent issue in the church.  Within each section, Berkhof reviews the development of the doctrine from the early church fathers through the middle ages, the reformation and into modern theology. The book is a great review for someone familiar with theology, but it is truly a book to study, not merely read.  If you enjoy theology, this is a book you need to own.