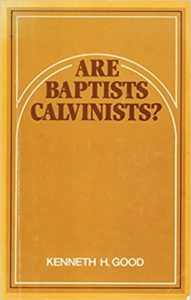 Comments:  At the time Dr. Good wrote this book, Grace Church of North Olmsted was actually called North Olmsted Baptist Church and was a member of the General Association of Regular Baptist Churches (GARBC).  This book was a call to the GARBC to return to its Calvinistic roots.  This excellent work is divided into two parts.  In Part I – Are Baptists Calvinists?, the main part of the book, four questions are answered in four chapters:  (1)  ‘Why the Question?’; (2) ‘What Is Calvinism?’; (3) ‘What Is Arminianism?’; and (4)  ‘Which Baptists?’  Here Dr. Good exhibits a superior understanding of both the Calvinist-Arminian debate and Baptist history.  He explains clearly what Calvinism and Arminianism are and why the debate is important.  He also demonstrates that Calvinism has always been a hallmark of mainstream Baptist doctrine.  Part II – The Doctrines of Election  is actually reprinted from Kenneth Good’s earlier commentary on the book of Ephesians, Chosen in Him (1967).  In this section it is demonstrated that election is Biblical, logical and unfathomable.  He briefly works through the New Testament vocabulary relating to election and overviews the most important passages regarding election (Romans 8:29-30; Romans 9-11; Ephesians 1:1-14).  He also deals with the problems of free will, reprobation (hyper-Calvinism), and Calvinism in regard to evangelism.  He gives us a balanced, Biblical understanding of this important doctrine.  His clear, Biblical thinking is exemplified by the following quote:  Theres is on the one hand the tendency to abstractly think of God as being all will and to press a rigidity of logic to the point that approximates fatalism.  Some theologians have done this and have brought their followers into darkness and despair.  It is safe to say that if the doctrines of election bring to the believer any sense of frustration or carelessness; or to the uncertain any feeling of discouragement or gloom, it is because they have been misunderstood.  God revealed these truths for other purposes than this (p. 248).  The book concludes with four appendices containing excerpts from the Canons of Dort (1618), the New Hampshire Baptist Confession of Faith (1833), and the Philadelphia Baptist Confession of Faith (1742) as well as the Ocean Grove Statement on Election (1974) in full.  This book is well worth reading for anyone who is at all interested in either the Calvinism-Arminian debate or Baptist history.