David Livingstone: The Truth Behind the Legend 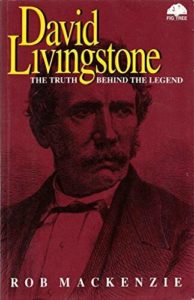 Comments:  This is an impressive biography of a very interesting man. The Lord used Livingstone to ultimately bring an end to the horrific slave trade in Africa as well as open the way for missionaries of the Gospel to the interior of Africa.  He did not live to see the success of his labors either from the perspective of the slave trade or from the perspective of missions, but his journals indicate that he had a true sense of the importance of his work.

David Livingstone (1813-1873) was both a missionary and an explorer.  He explored much of southern / central Africa, what is today Zimbabwe, Mozambique, Zambia, Angola, and Tanzania.  He was initially seeking an appropriate location to start a mission in central Africa, but he was also looking for a navigable waterway into the interior of Africa that would open up trade in the region, hopefully thereby making the slave trade superfluous from an economic standpoint.   Though he preached the Gospel wherever he went, he saw few genuine converts.  But in his journals he rightly predicted that the day would come when missionaries would win large numbers of converts with every sermon they preached.  He gained recognition and great fame in England for his many discoveries, most notably perhaps, Victoria Falls.  His final journey (1866-1873) was in the region surrounding Lake Tanganyika.  He was searching for the source of the Nile River, the discovery of which would, he believed, give him a platform from which to denounce the slave trade in central Africa.  He died in Africa, seeking the source of the Nile.

Livingstone had an almost superhuman determination in the face of seemingly insurmountable obstacles, yet he, predictably, did not always get along well with fellow Europeans in Africa, even though he had a reputation throughout the continent of being extremely kind and gracious and patient with the natives.  His love for the African people and his incredible endurance produced a great loyalty among his native African companions.  Perhaps one of the most interesting parts of the narrative is the description of Livingstone’s famous meeting with H.M. Stanley (1871), the American reporter / explorer who set off seeking to discover whether or not Livingstone was still alive.  Mackenzie, thankfully, includes biographical notes (a time line of Livingstone’s life) at the end of the book, something every biography should have.  This is truly a moving biography.