A Memoir of the Life and Writings of John Albert Bengel 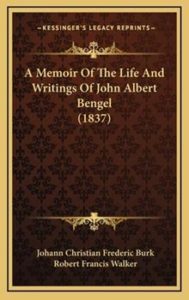 Comments:  The German edition was first published in 1831, this English edition was first published in 1837.  John Albert Bengel (1687-1752) was a German Lutheran Pietistic theologian and Biblical scholar.  He is most famous for his six volume commentary, Gnomon of the New Testament  (which is currently available from Wipf & Stock Publishers) and his work on the criticism of the Greek New Testament (comparing and collating manuscripts).  He was a leader of the Pietistic movement which was started by Philipp Jakob Spener (1635-1705) and A.H. Francke (1663-1727).  The educational center of Pietism became the University of Halle where Francke was a professor.  Pietism, an attempt to revitalize the spiritual condition of the Lutheran church, emphasized the need for holiness and good works in the life of the Christian.  Although the movement had many positive attributes, its weakness was its tendency toward mysticism.  John Albert Bengel was educated at Tubingen and taught at a seminary in Denkendorf (1713-41) for most of his career.  I found this book to be extremely interesting and thought-provoking.  It is an account of his life with many excerpts from his writings, both published works and private letters.  The book is divided into four parts:  (1) Bengel’s Education; (2) His Official Engagements; (3) His Literary Works; and (4) His Private Life.  Although I reject some of his Pietistic theology, he gave expression to a great deal of practical, godly wisdom and was truly a great Biblical scholar.