Building the Kingdom of God on Earth 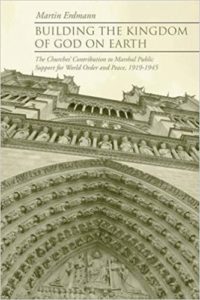 Comments:  In this thorough and well-documented doctoral thesis, Dr. Erdmann explains how the church was used to change American public opinion regarding the need for world peace, between the two world wars.  Following World War I, congress’s refusal to join the League of Nations highlighted the isolationist thinking of the people of the United States.  Erdmann explains how a group of men, lead by the Round Table Group in England diligently sought to change public opinion in Great Britain and the United States, regarding the need for a new world order.  The Round Table Group was principally lead by Philip Kerr and Lionel Curtis.  Out of the Round Table Group came the Royal Institue of National Affairs (in London) and the Council for Foreign Relations (in New York).  This book focuses mostly on the work of John Foster Dulles, a member of the CFR and later Secretary of State under President Eisenhower, who successfully sought to change public opinion in American via the ecumenical movement.  Their efforts were crowned with success when America joined the United Nations in 1945.

One of the most interesting aspects of this book is the open discussion within the Round Table Group regarding the necessity of using the church to bring in a one world commonwealth.  For example, Lionel Curtis, in his book Civitas Dei, wrote I feel that when once the Protestant churches have learned to regard the creation of a world commonwealth as an all-important aspect of their work in realising the Kingdom of God, an international commonwealth would come into being in a few generations.  A bridge would be thrown over the gulf in men’s minds which now bars our progress to a higher civilization.  My hope lies with the churches which are not bound by the chain of their past (quoted on p. 63).  This is a fascinating book from a historical perspective.  As a lover of history, I was immediately drawn into this book by the opening detailed account of the peace process following World War I and the background of the men in the Round Table Group.  But this is not merely an excellent work of history, the things revealed in this book have immense ramifications for the church today.  This book demonstrates how the organized church is being used as an instrument to bring about unity that transcends national boundaries for the purpose of removing national boundaries.

This is an excellent book with extensive documentation in the form of voluminous end notes.  It includes an extensive bibliography and an index.