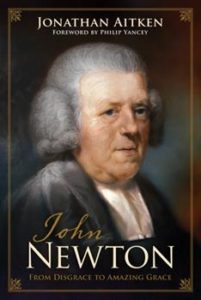 Description of author:   Jonathan Aitken is a British author and former politician.

Comments:  The story of John Newton (1725-1807), the author of the hymn ‘Amazing Grace,’ is truly amazing.  This book was a joy to read and hard to put down.  As a young man, John Newton was a true scoundrel.  His life was a life of wasted opportunities, immorality and prodigality, and multiple near-death experiences.  It was amazing that he even lived to the age of 23, the age of his conversion in 1748.  It was actually after his conversion that he became captain of a slave ship (1750-1754), and although he was an upright and gracious captain in comparison to the slave ship captains of that day, it was not until later in his life that he came to despise slavery and in fact became an instrumental factor in its abolishment in England, through his intimate relationship with and profound influence on the much younger William Wilberforce.  Newton was ordained to the ministry in the Church of England in 1764 and served as curate of Olney until 1779 when he became rector of St. Mary Woolnoth in London, where he remained until his death in 1807.  John Newton’s life includes so many interesting facets including his astounding conversion, his relationship with William Cowper the hymn writer, his relationship with William Wilberforce, his dealings with George Whitefield and John Wesley, his life as an author both of books and hymns, and his relationship with his wife Polly.  Aitken does an excellent job of covering all of these facets.  I highly recommend this book.