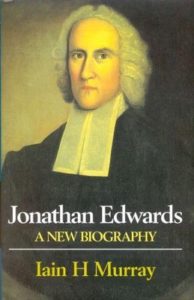 Description of author:   Iain Murray is a co-founder of Banner of Truth Trust (1957).  He served as assistant to Dr. Martyn Lloyd-Jones at Westminster Chapel in London (1956-59).  He is the author of numerous volumes on church history and Christian biography.

Comments:  Jonathan Edwards lived from 1703 to 1758.  He was born in East Windsor Connecticut and ministered as a Congregational pastor in Northampton, Massachusetts from 1724 to 1750, first as a colleague of his grandfather, Samuel Stoddard, and then as his replacement.  He was removed by the congregation in 1750 because he desired to limit participation in the Lord’s Supper to true believers.  In 1751 he moved to the frontier town of Stockbridge, Massachusetts where he ministered to a small congregation of Indians and whites.  He reluctantly accepted the presidency of Princeton College in 1757.  One month after his inauguration in February of 1758, he died from an innoculation against smallpox.  Jonathan Edwards is best known for his involvement in the Great Awakening of colonial New England in the early 1740s and for his many important literary contributions, including A Treatise Concerning Religious Affections (1746), An Account of the Life of Reverend David Brainerd (1749), and A Careful and Strict Enquiry into the Modern Prevailing Notions of Freedom of Will (1754).  His most famous sermon is Sinners in the Hands of an Angry God (1741).  In his writings, Edwards was most concerned with (1)  The nature of true conversion; (2) the defense of Biblical Calvinism in a day when the prevailing theological winds were blowing in the opposite direction; and (3) the defense of the Great Awakening on the one hand against the old school pastors and theologians who thought it was complete phanatacism, and on the other hand against the friends of the movement who were given to extremes and experientialism.

Murray’s biography is an excellent review of the life and thought of Edwards.  He is thorough, fair, and honest in his portrait.  Murray, himself an evangelical Christian and a Calvinist, balances out some of the harsh statements of recent biographers who despise his theology.  Edwards has been called the greatest thinker in the history of America.  Obviously such a statement is quite subjective, but he truly was gifted with a profound intellect and a deep piety that are rarely found together in one person.  But like other men he had weaknesses too.  His self-description (p. 435-6) reveals the fact that he was keenly aware of them.  This book was a joy to read.  It includes a list of his published writings (appendix 1), a note regarding the manuscripts of Edwards (appendix 2), a letter of Sarah Edwards (appendix 3), and an anecdote regarding George Whitefield (appendix 4), as well as a general index.  The one thing this fine work lacks is a biographical timeline of his life, something, in my opinion, every biography should include.