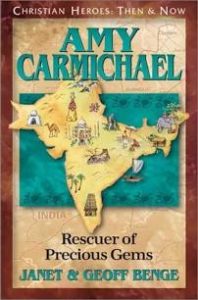 Description of author:  Janet & Geoff Benge are a husband and wife writing team.  Janet is a former elementary school teacher and Geoff has a degree in history

Comments:  Amy Carmichael (1867-1951) was born in Ireland.  Even as a young girl, she was involved in service for the name of Christ.  In Belfast she began ministering to poor ladies (shawlies) from the slums, choosing to live among them.  For a time, in her early 20s she worked in England for Robert Wilson, chairman of the Keswick Convention.  In 1892 at the age of 25, she left for Japan where she served for 2 years, before being forced to leave for health reasons.  After less than a year back in England, she sailed for India to serve the Zenana Mission Society.  She would spend the rest of her life in India.  Amy is most well known for her work at Dohnavur where she had a home for young girls who were rescued from prostitution in the Hindu temples.  She was also a prolific writer.  This is the fourth biography in this series, geared toward young people, that I have reviewed.