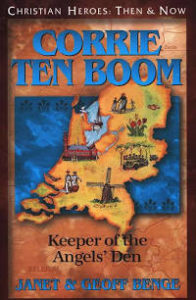 Description of author:  Janet & Geoff Benge are a husband and wife writing team.  Janet is a former elementary school teacher and Geoff has a degree in history.

Comments:  Corrie ten Boom (1892-1983) was in her late 40s, when in 1940, Hitler’s Germany invaded her country, Holland.  She and her father, Casper and her sister, Betsie became involved in the Dutch underground, hiding Jews from the Gestapo.  There home in Haarlem, the Beje, was a place where Jews found refuge temporarily until the underground could find places for them to stay in the countryside.  They had a small secret room (the Angel’s Den) built in Corrie’s bedroom where the Jews could hide in case of a Gestapo raid.  When the Gestapo eventually did raid the Beje, the Jews were safely hidden, but Casper, Betsie and Corrie were all arrested and imprisoned.  Casper, who was 84 at the time, died after 10 days in the Scheveningen Prison.  Betsie and Corrie spent 10 months in three different prisons, the last of which was the Ravensbruck Concentration Camp near Berlin.  Betsie died at Ravensbruck, but Corrie survived to tell the story of all that had happened, including how she and Betsie shared Christ with their fellow prisoners.  Corrie lived to age 91, spending most of her life after the war, traveling around the world and telling her story and the story of Christ’s love.  This biography, written by the Benges, is the second of the series (Christian Heroes: Then and Now) that we have read as a family.  It was hard for us to put down.  Many lessons regarding Christian virtue shine through including courage, faith, patience in trials, and suffering for doing what is good.  The lessons regarding history are also important and easily remembered through the reading of a book such as this.  If I have one concern regarding the series so far, it is perhaps that the Gospel is not clearly presented or emphasized as it should be in such biographies.  For a brief overview of Corrie’s life, including pictures of her, her family, and the Beje, go to the following website:   http://www.corrietenboom.com