Gladys Aylward, the Adventure of a Lifetime 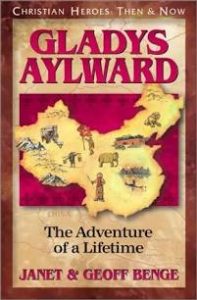 Description of author:  Janet & Geoff Benge are a husband and wife writing team.  Janet is a former elementary school teacher and Geoff has a degree in history.

Comments:  What a fascinating story!  Before reading this book, I was not familiar with Gladys Aylward.  Gladys (1902-1970) was an English woman who, at the age of 25, was led by God to go to China.  She bought her own railroad ticket across Europe and Russia.  After many setbacks (and life-threatening dangers) she finally made it to China where she joined Mrs. Lawson, a 74 year-old English missionary lady, in an obscure Chinese town called Yangcheng.  The two of them began the Inn of Eight Happinesses, an inn for muleteers who would lead their packs of mules up and down the trails to all the little villages in the mountains.  Their purpose was to share the Gospel with the muleteers who, hopefully, in turn would share the Gospel in all the villages they visited on their journeys.  This was the beginning of an incredible example of how God uses one person who is truly willing to follow Him.  Mrs. Lawson died about one year after Gladys arrived.  Through God’s providential working and the most interesting events, Gladys became known as Ai-weh-deh (Virtuous One), not only in Yangcheng, but throughout the whole province.  Many came to Christ including the mandarin (ruler) of the province in which she lived.  And then Japan invaded China (during World War II).  Eventually the Japanese came to Yangcheng.  Gladys, along with the many orphan children she had taken in, fled to a little mountain village.  She stayed in China throughout World War II and through the Communist takeover after the war, enduring much hardship and facing many dangers.  Sixteen years after arriving, Gladys returned to England for health reasons.  Ten years later she tried to return to China, but the Communist government did not let her back in, even though she had become a Chinese citizen.  She went instead to Formosa (Taiwan) where she ministered to the Chinese people until her death.  For a recording of Gladys sharing her testimony go to the following website:  http://www.sermonindex.net/modules/mydownloads/viewcat.php?cid=63