Revival & Revivalism: The Making and Marring of American Evangelicalism 1750-1858 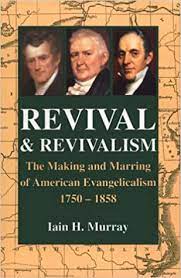 Description of author:  Iain Murray is the co-founder of Banner of Truth Trust in 1957.  He served as assistant to Dr. Martyn Lloyd-Jones at Westminster Chapel in London (1956-59).  He is the author of numerous volumes on church history and Christian biography.

Comments:  This is the third book that I have read by Murray (Evangelicalism Divided, 2000; The Forgotten Spurgeon, 1994).  All three books have been superb.  This book reviews the changes that took place in the thinking of American churches regarding the nature of revival between 1750 and 1858.  The thesis of the book is more or less stated in the introduction:  The understanding of the subject of revival has passed through several distinct phases in American history.  In the first phase, from the 1620s to about 1858 (the year which marked the last general religious awakening in North America), revival was understood to refer to ‘some special seasons wherein God doth in a remarkable manner revive religion among his people’ . . . Although the ideas for it were born earlier, it was not until the last forty years of the nineteenth century that a new view of revival came generally to displace the old, and a distinctly different phase in the understanding of the subject began.  A shift in vocabulary was a pointer to the nature of the change.  Seasons of revival became ‘revival meetings’.  Instead of being ‘surprising’ they might now be even announced in advance, and whereas no one in the previous century had known of ways to secure a revival, a system was now popularised by ‘revivalists’ which came near to guaranteeing results.  But instead of revival and revivalism being recognized as two different things, the remarkable fact is that the promoters of the new view, whose books came to govern evangelical thought, apeared to believe that they represented the authentic thought of American Christian history (p. xvii – xviii).  Murray begins by reviewing the ministries of Calvinistic pastors of the late 18th century and early 19th century including some who were involved in the Second Great Awakening.  Most notably, he considers Samuel Davies (1723-1761), Archibald Alexander (1772-1851) – the co-founder of Princenton Seminary, and Asahel Nettleton (1783-1844).  These men understood revival as a blessing from God whereby He blessed the natural use of the means of grace (the preaching of the Word and prayer).  Revival was purely the sovereign work of God.  The new way of thinking came in primarily through the theology of N.W. Taylor of Yale (what came to be known as New Haven Theology) and the preaching of Charles Finney (1792-1875).  This new approach ‘produced’ revivals by using new means that were meant to excite the emotions of the people and gain ‘decisions for Christ’.  The new way was epitomized by Finney’s book, Lectures on Revival of Religion.  It was founded on Arminian theology and introduced the idea of ‘walking the isle’ to demonstrate saving faith.  Towards the end of the book he describes the true revival that took place all across the nation in 1857-1858 (chapter 13).  Murray closes the book with two appendices describing (1) revivalism in England in which he discusses, among other things, D.L. Moody’s revivals in England and C.H. Spurgeon’s views regarding the new thinking; and (2) revivals in the South.  This book is especially important because of the underlying question of the nature of true salvation.