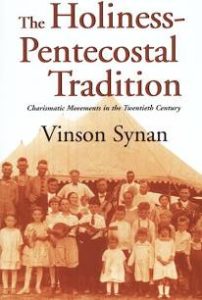 Description of author:   Dr. Vinson Synan is Professor of Divinity and Dean Emeritus at Regent University in Virginia Beach.  Since Dr. Synan is on the faculty of the school where Pat Robertson is President, he is obviously sympathetic to the Pentecostal movement.

Comments:  It is impossible to be neutral in regard to the Pentecostal / Charismatic movement.  The Pentecostal movement was perhaps the greatest single agent of change in the church of the 20th century.  The ecumenical movement, Christian rock music, televangelists, and the church growth movement have all either originated from or been greatly helped along by the Pentecostal / Charismatic movement.  To understand the church of the 20th century, one must understand this movement.  From an historical perspective, this book is a good place to begin.  Emphasizing its roots in the holiness tradition that came out of 19th century Methodism and revivalism, Synan traces the Pentecostal movement from the Azusa Street revival in 1906 through the development of the Pentecostal denominations of the first half of the century, through the Charismatic movement of the 1960s and 70s, through the Third Wave of the 1980s and 90s.  Though it does not ignore the negative aspects of the movement, the book generally deemphasizes and minimizes the radical elements of the movement.  For example, Synan writes very little about William Brahnam and the latter rain movement, or the faith healers and the positive confession (word of faith) movement, or some of the bizarre teachings and practices that have come out of the movement.