A History of Pastoral Care in America 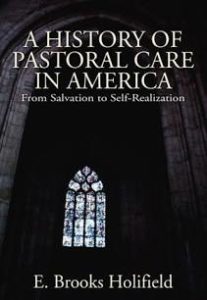 Description of author:  E. Brooks Holifield is Professor of American Church History at Emory University.  He is also the former president of the American Society of Church History.

Comments:  I stumbled upon this book while browsing through Wipf and Stock’s website catalogue.  As a pastor, I found the title and the description of the book irresistible.   The back cover reads in part:  Dr. Holifield details the shift in emphasis from saving souls to supporting individuals in self-realization, and in the process raises thought-provoking questions about the preoccupation with psychological methodology evident in modern society and clergy.  Holifield writes from a purely historical perspective.  He begins by briefly explaining how the early American approach to “the cure of souls” was founded on the Biblical concept of sin.  Sin was the problem, salvation was the cure, and the method of the clergy was to reason with the counselee.  He explains in detail how the Puritans counseled their congregations.  In one of the most fascinating sections of the book he elucidates the issues that divided the New Lights and the Old Lights during the first Great Awakening (chapter 3).  He then documents the gradual change of emphasis that took place over three centuries from self denial (based on the nature of sin) to self-love, to self-culture, to self-mastery, to self-realization.  He explains how psychology came to influence our culture and the clergy, detailing the influence of men like William James, Sigmund Freud, Erich Fromm and Carl Rogers.  Although Holifield does not explicitly declare it, psychology evidently entered the church through the doors of the liberal denominations.  Evangelicals basically drop out of this history after a mention of R.A. Torrey on page 163.  It is interesting to note that today Evangelicals are embracing psychological theory, in the same way that the liberals of the early 20th century embraced it.  One of the reasons this book is so interesting is its use of detailed historical anecdotes of pastoral counseling (e.g. p. 33-36; 67-69; 238-241; 252-256; 301-303).  This is truly a must read for anyone who would like to understand how psychology has affected the church.