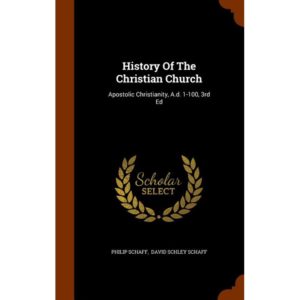 Description of author:  Philip Schaff (1819-1893) was a church historian and theologian.  He was professor of church history and Biblical literature at German Reformed Seminary in Mercersburg, PA and, later served as professor at Union Theological Seminary in New York.

Comments:  Though written almost 125 years ago, this is an exceptional read.  The whole set of 8 volumes covers church history from the birth of Christ (technically pre-church history) through the Reformation of the 16th century.  This first volume is for all practical purposes an introduction to the New Testament.  He discusses, among other things, the background of the NT, the life of Christ, the chronology of Acts, and the writers and books of the NT.  Though from the standpoint of scholarship, this work is obviously not up to date, yet much of his insight is timeless – for example his discussion of the life and character of  John (p. 412-431). There is much in the book to disagree with, like his interpretation of Peter as a kind of mediating position between Paul (liberal/ Gentile Christianity) and James (conservative / Jewish Christianity) (p. 522) and then John’s final uniting of the Gentile and Jewish theologies (p. 549).  This kind of naturalistic thinking, that tends to put the apostles at odds with one another in regard to doctrine, seems to be the result of Baur’s influence, under whom he studied at Tubingen (cf. p. 209-210).  Yet he ardently defends supernaturalism and the historicity of the miracles. His interaction with the scholars of the 19th century, provide a great deal of insight into the development of liberal and conservative criticism of the New Testament (especially if you read the foot notes).  Schaff stands against radical liberal criticism of the New Testament, yet he was no conservative.  He seems to stand with the respectable critics of the 19th century – men like J.B. Lightfoot, Henry Alford, Ellicott, Lange, Meyer, and Godet.  These men defended the integrity of the New Testament against radical critics like Baur and the Tubingen school, yet they themselves tended to hold a deficient view of inspiration.   I found it most interesting that Schaff, a man who was a professor at the liberal Union Theological Seminary, who held a deficient view of inspiration (he did not believe in inerrancy), and who was a pioneer ecumenist, in many ways shows a deeper respect and greater reverence for the writers and the writings of the New Testament than many (perhaps most) evangelical scholars writing today.  This is especially highlighted in his discussion of the independent origins of the Synoptic Gospels (p. 598-602).  He closes the discussion with the following statement:  What should we think of an historian of our day who would plunder another historian of one-third or one-half of the contents of his book without a word of acknowledgment direct or indirect?  Let us give the Evangelists at least the credit of common honesty, which is the basis of all morality (p. 602).  This statement condemns most modern evangelical New Testament scholarship, which generally teaches that Matthew and Luke borrowed much of their material from Mark.  This volume was well worth reading and I look forward to reading the remaining seven volumes (some day).