J. Gresham Machen: A Guided Tour of His Life and Thought 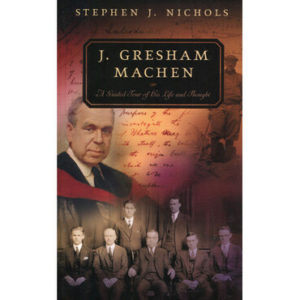 Description of author:  Stephen Nichols is professor at Lancaster Bible College in Lancaster, PA.  He has also authored books on Martin Luther and Jonathan Edwards.

Comments:  This is an excellent introduction to the life and writings of a stalwart of the Christian faith.  Machen (1881-1937) was professor of Greek and New Testament at Princeton for many years (1906-1929) before departing to found Westminster Theological Seminary in 1929.  He also was the founder of the Orthodox Presbyterian Church in 1936.  A true scholar who was committed to the core doctrines of the Gospel, Machen became the central spokesman for Evangelical Christianity in its battle against Liberalism.  This book is an important reminder of the need of faithful men in scholarship as well as the need for pastors to be diligent in the study.  The first 80 pages of this work are devoted to a brief summary of Machen’s life.  The author then divides Machen’s writings into three categories (theology, culture, and church) and discusses each in turn.  This book is both informative and inspiring.  One of the most interesting parts of the book is his description of Machen’s year of service with the YMCA in France during World War I (p. 153ff).  His exposure to the battlefield had a profound effect upon his thought and served to foreshadow the formidable spiritual battle he entered in the last decade and a half of his life.  The author has provided very helpful bibliographical information both in regard to Machen’s life and writings as well as the historical background, especially in relation to the history of Princeton Seminary and the  history of the Fundamentalist / Liberal debate of the early 20th century.  For some reason the book has no subject index.